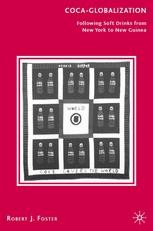 This book explores globalization through a historical and anthropological study of how familiar soft drinks such as Coke and Pepsi became valued as more than mere commodities. Foster discusses the transnational operations of soft drink companies and, in particular, the marketing of soft drinks in Papua New Guinea, a country only recently opened up to the flow of brand name consumer goods. Based on field observations and interviews, as well as archival and library research, this book is of interest to anyone concerned about the cultural consequences and political prospects of globalization, including new forms of consumer citizenship and corporate social responsibility.

Robert J. foster is Professor of Anthroplogy and Mercer rugler distinguished Teaching Professor at The University of Rochester.

"Skillfully navigating the pitfalls of reading soft drinks as either a pat story of unmitigated coca-colonization on the one hand or autonomous local resistance on the other, Foster presents a persuasive case for both the openness and the constraints of the processes he traces." - Comparative Studies in Society and History

"This is a great book. It is definitely worth incorporating in your teaching if you are a professor, and in your thinking if you are a human being who cares about people and our environment. Foster pulls together many strands of cultural anthropology to create a compelling story about how soft drink corporations are attempting to take over the world not just in terms of sales but also in terms of government and citizenship." - anthropologyworks.com

"Neither a politically-correct polemic against corporations nor a paean to the glories of free trade, Coca-Globalization is a thoughtful look at how products can take on extraordinary meaning for human beings and how shareholders and soft drink consumers can have an impact on business decisions. - Mark Pendergrast, author of For God, Country & Coca-Cola and Uncommon Grounds

"A profound, scholarly study that doggedly tracks down and records in detail the way Coca-Cola inhabits our world today. Foster s riveting presentation and analysis of Coca-Cola in Papua New Guinea is matched by his sensitivity to global issues of value, shareholder activism, and the environment. A firm foundation for a genuinely informed politics of consumption." - Daniel Miller, Professor of Material Culture, Department of Anthropology, University College London

"The book is simply one of the most eloquently argued and clearly written texts on globalization that I have ever read." - Paige West, Assistant Professor of Anthropology, Barnard College, Columbia University

"Foster's retelling of the story of Coke asks that we not be lured into alarmist opposition to globalization simply because of the power and reach of an immense profit-driven global agent. Nor does his account prompt us to see the global relations of Coke as benign or ethically attuned to the fragility and creativity of local culture. Rather, it suggests that the sources of Coca-Cola's expansive power to affect politics, culture and material conditions can also be instruments for progressive consumer action - for the reformist political action of peoples as consumers." - Socialism and Democracy

"The book brilliantly pursues [its] objectives . . . [Foster s] discussion is of such historical depth and analytic breadth that I cannot summarize it here" - American Anthropologist

"Well beyond area specialism, the interest of Foster s book lies in the impressive details of his tracking of Coke along global commodity networks. Its originality lies in the sustained application of an approach to value formation that is derived from Callon et al. s (2002) notion that a product is the contingent outcome of a constant process of qualification." - Journal of Consumer Culture