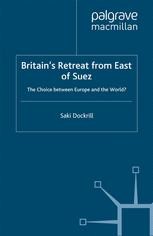 Britain’s Retreat from East of Suez

The Choice between Europe and the World?

This book, based on recently declassified documents in Britain and the USA, is the first detailed account of Britain's East of Suez decision, which was taken by the Harold Wilson Government in 1967-68. Contrary to received opinion, the author argues that the decision was not taken hastily as a result of the November 1967 devaluation. Nor is there any hard evidence to support the notion that there existed a 'Pound-Defence' deal with the USA. Despite Washington's pressure to maintain Britain's East of Suez role, the decision was taken by the Labour Government on the basis of a long-term effort to re-examine Britain's world role since 1959, and it marked the end of an era for postwar Britain.

SAKI DOCKRILL is a Senior Lecturer in War Studies at King's College London. Dr Dockrill has written extensively on Anglo-US relations in Europe and Asia since 1945 and her recent publications include Eisenhower's New Look National Security Policy, and she is co-editor of Cold War Respite: the Geneva Summit of July 1955. She is a Fellow of the Royal Historical Society, General Editor of Palgrave's Cold War History series and a co-editor of the Journal of Cold War History.

'Dockrill makes use of recently declassified documents in Britain and the United States, as well as interviews, memoirs, and private papers, to provide a more nuanced understanding of the deliberations that resulted in Prime Minister Harold Wilson's decision to withdraw from Britain's major military bases East of Suez in 1967/68. Unlike conventional approaches to this topic, which link the sterling devaluation of November 1967 to the East of Suez decision, Dockrill

'This ground-breaking monograph will be of immense value to anyone with an interest in the mechanics of decision-making in Whitehall, and should be essential reading for all students of British foreign and defence policy in the twentieth century.' - Keith Hamilton, Senior Editor, Documents on British Policy Overseas