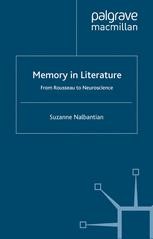 From Rousseau to Neuroscience

This book is the first to discover and probe in depth memory phenomena captured in literary works. Using literature as a laboratory for the workings of the mind, this comparative study of writers from Jean-Jacques Rousseau to Octavio Paz, including Proust, Breton, Woolf and Faulkner, uncovers valuable material for the classification of the memory process. Nalbantian's daring interdisciplinary work, involving literature, science, and art, forges a new model for dialogue between the disciplines.

SUZANNE NALBANTIAN is Professor of English and Comparative Literature at Long Island University. She received her PhD from Columbia University and is a permanent member of its Society of Fellows in the Humanities. A specialist in nineteenth and twentieth-century European literatures, she is the author of The Symbol of the Soul from Hoderlin to Yeats, Seeds of Decadence in the Late Nineteenth-Century Novel, and Aesthetic Autobiography: From Life to Art in Marcel Proust, James Joyce, Virginia Woolf and Anais Nin. She has also edited Anais Nin: Literary Perspectives.

'In this book, Suzanne Nalbantian boldly ushers in a new way of writing

about literature. She bridges the gap between literary criticism and the

developments of neurosciences, this book reopens a debate initiated at the

turn of the last century with James and Bergson...' - Professor Jean-Michel Rabaté, University of Pennsylvania

'Suzanne Nalbantian's Memory in Literature is a remarkable contribution to the voluminous literature on this most popular of subjects. Her range of reference, which includes not only a dozen major novelists and poets but painters as well along with all the major players from psychology and neuroscience, is most impressive. As she moves easily between languages she achieves an overview of the subject that is linguistically unconfined' - Professor James Olney, Louisiana State University

'There is much of interest here and much to learn from this sophisticated book.' - Brain: A Journal of Neurology