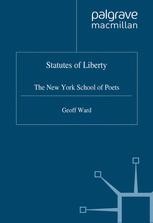 The New York School of Poets

Statutes of Liberty (1993) was the first book on The New York School of Poets, and offers the definitive critical account of its key figures: John Ashbery, Frank O'Hara and James Schuyler. This second edition contains up-to-date material on the group and its growing influence on postmodern poetics. A new postscript focuses on the work of Ashbery, currently the most esteemed American poet since Wallace Stevens, and his profile output in the 1990s, including his two hundred page epic poem Flow Chart.

GEOFF WARD is Professor of English at the University of Dundee. His publications include Language Poetry and the American Avant-garde (1993); he edited The Bloomsbury Guide to Romantic Literature, and is co-editor of Re: Joyce (1998). He has recently been awarded a Leverhulme Fellowship in order to write a critical biography of John Ashbery.

'By a wonderful irony - an irony John Ashbery, Frank O'Hara, and James Schuyler would surely have appreciated - the best overview of the New York School of Poets was written by a British poet-critic then living in Liverpool. Geoff Ward's superb close readings of individual poems is everywhere informed by stringent cultural and political commentary. In this new edition, Ward adds a postscript on the legacy of New York poetry, especially in the lyric of the women poets, Barbara Guest and Marjorie Welish, he surveys Ashbery's recent oeuvre, and he revises his earlier estimates of the key influences on his poets. This is a genuinely CRITICAL book, one that no one interested in postwar American poetry will want to miss.' - Marjorie Perloff, Professor of English, Stanford University

'Geoff Ward offers astute readings of several of the most engaging, original, and socially cogent American poets of the past half-century. Statutes of Liberty: The New York School of Poets is a richly detailed and thoughtful account of the contexts and practices of a writing whose ability to reinvent its forms has made it invaluable to the present and future of poetry in English.'- Charles Bernstein, Director, Poetics Program, SUNY-Buffalo

'...gives voice to a lively, combative personality through the characterizations and judgements it renders.' - Stephen Freedman, American Literature