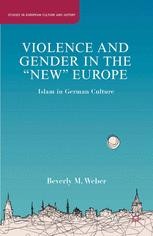 Violence and Gender in the "New" Europe

Weber contributes to the ongoing scholarly discussion about Islam in the West, demonstrating how current thinking about gender violence prohibits the intellectual inquiry necessary to act against such violence, and analyzes ways in which Muslim women participate in the public sphere by thematizing violence in literature, art, and media.

Beverly M. Weber is an assistant professor of German in the Department of Germanic and Slavic Languages and Literatures at the University of Colorado at Boulder.

"Ranging from dominant discourses on honor killings and headscarves to self-representations and artistic interventions in literature as well as performance, Weber's study undertakes a much-needed comprehensive investigation of the contemporary 'regime of gender violence,' that is, the key role violence has played in defining the position of Muslims in the German public sphere (in the larger European context). Through nuanced theorizing as well as careful historical contextualization, Weber develops an intersectional framework for analyzing gendered violence in a way that does not reinforce racialized discourses of cultural and/or religious difference. In demonstrating how the contemporary German public sphere is constituted through differential regimes of visibility - which, for example, invisibilize racism in foregrounding headscarves - Weber's analysis paves the way for imagining Muslim women as active participants, rather than victims, in the democratic process." - Claudia Breger, Associate Professor of Germanic Studies and Adjunct Associate Professor of Communication and Culture and Gender Studies, Indiana University, Bloomington, USA

"This is without doubt one of the most thorough and original analyses of the charged European debate around gender, violence, and Muslim minorities. Importantly, Weber does not only carefully unpack the problematic racing of gender and religion in German liberal multiculturalism, using a variety of familiar and unfamiliar sources, but she also points to the agency of Muslim women so frequently denied by those claiming to 'save' them. A must read for anyone interested in understanding contemporary Europe." -

"Beverly Weber does not shy away from making thorough and politically engaged arguments about a range of complicated topics - the connections between sexuality, race, and religion. Gender and Violence in the 'New' Europe offers the perfect model for how German Studies research can remain relevant in today's globalized world." - Maria Stehle, Assistant Professor of German, University of Tennessee, Knoxville, USA