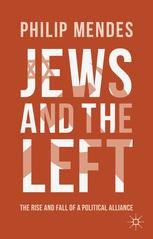 Jews and the Left

The Rise and Fall of a Political Alliance

The historical involvement of Jews in the political Left is well known, but far less attention has been paid to the political and ideological factors which attracted Jews to the Left. After the Holocaust and the creation of Israel many lost their faith in universalistic solutions, yet lingering links between Jews and the Left continue to exist.

Associate Professor Philip Mendes is the Director of the Social Inclusion and Social Policy Research Unit in the Department of Social Work at Monash University, Australia, and also holds an Honorary appointment in the Australian Centre for Jewish Civilisation. He has been researching Jewish Left history and politics for over 20 years, and is the author or co-author of seven books including The New Left, the Jews and the Vietnam War, 1965-72 (1993), and jointly edited with Geoffrey Brahm Levey, Jews and Australian Politics (2004).

'Philip Mendes charts the rise and fall of the alliance through the revolutions of 1830 and 1848 to its decline in the 20th century and a possible shift to the Right key factors being the Holocaust (''which destroyed the Jewish Left constituency''), Soviet persecution in the 1950s, the 1967 Six Day War and the consequent shift from the Left's previous support for the state of Israel to today's ongoing debate.' - Steven Carroll, The Sydney Morning Herald

'In charting the evolution of left-wing ideas about Jews from the French Revolution onward and Jews' natural affinity for left-wing politics, Mendes traverses familiar terrain but he does so with succinct, learned aplomb.' - Tibor Krausz, The Jerusalem Report

'A fine systematic work of history and analysis that avoids oversimplification, recognizes exceptions to general trends, and is international in coverage.' - The American Culture

'In his Jews and the Left: The Rise and Fall of a Political Alliance Philip Mendes has produced, in the main, a fine systematic work of history and analysis that avoids oversimplification, recognizes exceptions to general trends, and is international in coverage.' - Liberty21 Institute

'Jews and the Left: The Rise and Fall of a Political Alliance is an intelligent, comprehensive and analytical dissection of the complex relationship between Jews and the Left. ...Philip Mendes has written an important book in untangling the ideological and psychological knots in this complex question. It will set the standard for years to come.' - Jewish Quarterly

'Philip Mendes's book informs and challenges our happy processes of narrative construction with scholarly research and it offers a more detailed study of how things have actually been in particular times and places. It gives us more fixed points which discipline and shape the stories we tell ourselves; it offers us a more complex and human picture than some of us would like to assimilate into our schemas of history.' - David Hirsh, Fathom

'This book is an important source of information about Jewish involvement in the Left, and offers sensible explanations rather than propaganda about the role played by Jews in radical politics.' - Lyle Allan, Labour History Society of Australia's Recorder

'Philip Mendes has provided us with a truly comprehensive study of the historical relationship between Jews and leftist politics. ... To put it clearly, anyone who wants to get a good overview of the subject without reading several hundred books can do so by reading this one.' - Stan Nadel, Reviews in History

'[This book] provides helpful material to substantiate historical arguments... [and is] written in a highly readable style.' - Buchbesprechungen