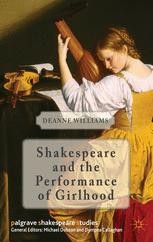 Shakespeare and the Performance of Girlhood

Deanne Williams is Associate Professor of English at York University in Toronto, Canada. Her previous books include The French Fetish from Chaucer to Shakespeare (2004), Postcolonial Approaches to the European Middle Ages: Translating Cultures, edited with Ananya Jahanara Kabir (2005), and The Afterlife of Ophelia, edited with Kaara Peterson (2012).

“Williams’ book emerges as an original and engaging contribution to the current critical conversation around childhood and youth in early modern literary studies. … Williams’ argument that girlhood is an unstable category constituted through performance is ultimately persuasive, and the strengths of her book are many: it is lucid and compelling, a work of great breadth and impressive scholarship, and a truly absorbing read.” (Rachel Prusko, Medieval & Renaissance Drama in England, Vol. 30, 2017)

“Shakespeare and the Performance of Girlhood opens new doors for future studies of the legacy of Shakespeare and childhood. It is a text invested in Shakespeare studies, social histories, literary theory, and feminist studies that advances each of these fields. Williams’s analyses and contextualizations of the works in question offer original ways of understanding the girls in Shakespeare’s works and how such works went on to influence the modern understanding of girls and girlhood.” (M. Tyler Sasser, Early Theatre, Vol. 19 (1), June, 2016)

“Williams adds valuable information to the history of girls and performance–in medieval entertainments and community festivals, in convent productions, in court masques and closet dramas, and as playwrights and public performers on the Restoration stage. Her book would be of interest and use to any scholar in the field of early modern gender and drama, but the writing is accessible and clear enough for general readers and undergraduate students as well.” (Laura Schechter, English Studies in Canada, Vol. 42 (1), 2016)

“Shakespeare and the Performance of Girlhood offers an original approach and an important contribution to the existing literature on Shakespeare and woman's history... The findings in this study help enrich the notion of (young) women as participants in and contributors to their local and national cultures in relation and at times in contrast to the representation of girls in plays written by male authors. The study of Jacobean girl dramatists who staged and performed images of family life in the contexts of their own households will be of particular interest to scholars and students of early modern drama and social history.” (Nadia T. van Pelt, Journal of the Northern Renaissance, Vol. 7, 2015)

“Richly researched and persuasively written... [Williams] opens up fresh perspectives for further research in 'the rich history of girls on stage' that she so elegantly explores in this volume.” (Janice Valls-Russell, Cahiers Élisabéthain, Vol. 87, Spring 2015)

“Deanne Williams ventures into largely unexplored territory in this fascinating and important study of girlhood and its implications in Shakespeare. The book is challenging, well argued and continuously interesting, and reveals something genuinely new about Shakespeare.” (Stephen Orgel, J. E. Reynolds Professor in the Humanities, Stanford University, USA)

“With great lucidity and authority, yet a nicely light touch, Williams draws together an immense amount of research into the cultural history of pre-modern girlhood to frame original and insightful arguments, which are developed with impressive clarity. This outstanding book gave me a fresh perspective on ways of reading Shakespeare's girls and a new appreciation of some familiar works.” (Kate Chedgzoy, Newcastle University, UK)

“Deanne Williams provides the first sustained account of "girlhood" in Shakespeare's plays, one that is performative rather than essentialist. Girl characters performed by boy actors, performances by girls in masques and other private theatricals, and girls as writers and performers inspired by Shakespeare's girls, are surveyed to show compellingly how "girlhood" emerged as a significant formation in the early modern period. From "la Pucelle" to the birth of baby Elizabeth at the close of Henry VIII, from Macbeth, who describes himself as a "baby of a girl," to the thirteen-year-old masque writer Lady Rachel Fane, Williams excavates a history that has long been ignored but has come into its own.” (Karen Newman, Brown University, USA)

“Williams radically reframes common notions of girlhood as a marginal, interstitial state, interpreting it rather as the cultural site of creative and potentially radical possibilities. Moving from girls as characters in the Shakespeare canon to historical girls empowered by Shakespeare to perform and create roles for girls, Williams reveals how those roles can be innovative and liberating. Anyone interested in gender, in Shakespeare, or in Shakespeare's engagement with the problematic of gender will find this book fresh and compelling.” (Coppélia Kahn, Professor of English and Gender and Sexuality Studies, Brown University, USA)