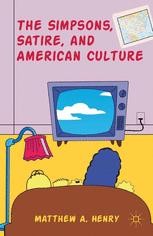 The Simpsons, Satire, and American Culture

How is The Simpsons a satirical artwork engaged with important social, political, and cultural issues? In time for the twenty-fifth anniversary, Henry offers the first comprehensive understanding of the show as a satire and explores the ways in which The Simpsons participates in the so-called "culture war" debates taking place in American society.

Matthew A. Henry is professor of English and Cultural Studies at Richland College.

"[This] book is well written, well organized, and well researched, drawing heavily on literature on [The Simpsons] and on satire in general . . . The book is not a fan letter but something far more valuable - an intelligent book about an intelligent sitcom. Summing up: Recommended. All readership levels." - CHOICE

"By highlighting the advancing American culture, from the inception of The Simpsons (and earlier in many cases) to the current political environment in the twenty-first century, Henry does a very good job providing analysis for the ongoing conversation that The Simpsons has created with the American public." - The Journal of American Culture

"Matthew A. Henry's The Simpsons, Satire, and American Culture represents the most comprehensive study to date of one of the most influential programs not just in television history, but in the development of the tradition of postmodern American cultural satire. In each chapter, Henry offers incisive, original readings of The Simpsons in relation to the key flash points of contemporary American culture - race, gender, sexuality, class, religion, immigration - that make, as he persuasively argues, 'The Simpsons a valuable barometer of shifting sensibilities and an important resource for better understanding some of the key ideological battles taking place within American culture.' Henry's book is a necessary touchstone for anyone interested in The Simpsons and the state of satire in America today." - John Alberti, editor of Leaving Springfield: The Simpsons and the Possibility of Oppositional Culture

"The Simpsons has been a staple of American popular culture for over two decades, surpassing the legendary Gunsmoke as the longest-running American primetime, scripted television series. While the scope and breadth of its influence is impossible to measure, Henry masterfully demonstrates how The Simpsons continues to shape the cultural landscape of the United States. Weaving together insightful commentary and humorous reflections that will surely delight both scholars and fans of the show, he explores the interplay between America's most nuclear family and religion, politics, race and ethnicity, gender, sexual identity, and socioeconomic status. This book reveals how The Simpsons is far more than entertainment; it is modern day pamphleteering in the greatest of democratic traditions." - Joseph J. Foy, editor of Homer Simpson Goes to Washington: American Politics through Popular Culture