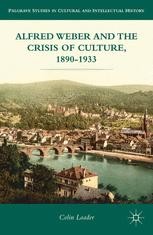 Alfred Weber was an important participant in the dialogue over the political and cultural crises of the late Empire and Weimar Republic. This study connects Weber's career to the social, political, intellectual, cultural, and institutional contexts of the period.

Colin Loader is professor of History at the University of Nevada, Las Vegas. He has written primarily on the history of German sociology. He is the author of The Intellectual Development of Karl Mannheim, and is the co-author or co-translator of three other books on Mannheim.

'One of the world's leading historians of German social science, Colin Loader has produced the first English language account, not only of Alfred Weber's ideas, but of their location in the social and cultural struggles of his times. Reconstructing Weber's pioneering effort to create a cultural sociology, Loader reveals an alternative genealogy and explains why it became a path not taken.' Jeffrey Alexander, Lillian Chavenson Saden Professor of Sociology, Yale University

'Few of us know anything substantial about Max Weber's younger brother, Alfred. Now, at last, we have a superb critical orientation to his ideas. With admirable sensitivity to historical context, Colin Loader introduces readers to Alfred Weber's life, location, intellectual network, and oeuvre, giving special attention to his innovative sociology of culture. A translation of one of Alfred Weber's key works on 'cultural sociology' caps this fascinating book. A major contribution to the history of ideas and 'discursive coalitions.'' Peter Baehr, professor of Social Theory and dean of Social Sciences, Lingnan University, Hong Kong

'A renowned specialist of Karl Mannheim, Colin Loader in his new book analyses Mannheim's mentor Alfred Weber, thus presenting the first study of Max Weber's brother in the English-speaking world. His emphasis is on the interrelation between Weber as a product of his crisis-stricken socio-cultural environment and his cultural sociology diagnosing this crisis. Loader's methodological approach is strictly European, combining Mannheim's sociology of knowledge with elements derived from Pierre Bourdieu and recent German scholars a new and innovative stimulus for biographical research on both sides of the Atlantic Ocean.' Eberhard Demm, professor, DPhil., Dr. ès-lettres et sciences humaines, Lyon III, France / Koszalin, Poland