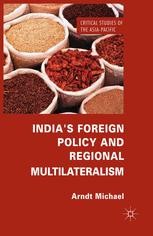 The book provides a novel analytical perspective on regional multilateralism in South Asia and its neighbouring regions and covers the genesis, evolution and status quo of the four major regional organizations.

'The book provides a rich analysis of India's contribution in the discourse, the development and the institutional designs of regional multilateralism. The value of the book also lies in its detailed discussion on the origin and evolution of the SAARC, BIMSTEC, IOR-ARC and MGC as well as a comprehensive analysis of India's 'Cognitive Prior'.' - Gulbin Sultana, India Quarterly: A Journal of International Affairs

'Arndt Michael has made a successful attempt to unearth the normative and ideational determinants of India's foreign policy. He traces the evolution of multilateralism in South Asia and tries to explore the impact of the cognitive prior (ideas, norms and values) of India's foreign policy on the normative structure in the region. [ ] This book is a detailed account of the evolution of multilateralism in South Asia and its relationship with Indian norms and values. Not many texts are available on this aspect of India's foreign policy. In this sense, it serves a useful purpose of bridging a critical gap in the literature.' - Rajan Kumar, International Studies

'Michael's work provides a valuable empirical study of India's engagement in the different regional multilateral setting. His main focus in on the development and evolution of regional multilateralism in South Asia, on which he elaborates extensively in Chapter 3. Moreover, Michael also deserves credit for dealing with a variety of other multilateral initiatives in which India has actively engaged. Michael's main contribution in his detailed tracking of the influence of regional multilateralism on India's foreign policy. His work offers a wealth of information for scholars who seek greater insight into the role of regional organizations in India's foreign policy.' - Christian Wagner, International Quarterly for Asian Studies (Asienforum)

'This book convincingly argues why and how India has until now preferred bilateral negotiation processes and has used a multitude of multilateral organizations in order to push through its own self-interests. [ ] The analysis permits to trace the fears, tensions, chess moves and reactions in India's foreign policy - and that of its neighbours - all the way back to their origins and comprehended them step by step.' - Heinz Nissel, Mitteilungen der Österreichischen Geographischen Gesellschaft

'The monograph examines the connection between India's foreign policy and stagnating multilateralism in the South Asian and neighbouring regions from a constructivist-oriented perspective. [ ] The book is an interesting and fascinating read for students and researchers in the field of International Relations.' - Armin Müller, ASIEN The German Journal on Contemporary Asia

'It is an important topic especially with regard to the developing world. It is logically written and allows even non-specialists to grasp the basic topic. It is based on thorough knowledge of the existing literature and incorporates significant new original materials that make this a must read.' - William Head, Chair of Cecil B. Currey Book Award, Association of Third World Studies (ATWS)