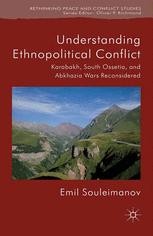 Emil Aslan Souleimanov is Assistant Professor in the Department of Russian and East European Studies at Charles University, Prague, Czech Republic. He is author of An Endless War: The Russian-Chechen Conflict in Perspective (2007). He has published widely in journals such as Europe-Asia Studies, Problems of Post-Communism, Middle East Policy, Osteuropa and Politique étrangère and provided numerous analyses to the Czech Ministries of Foreign Affairs and Defense, and NATO.

“The book is a significant contribution to the existing scholarly literature on the conflicts in the South Caucasus region. Souleimanov’s book presents a theoretically and empirically synthetic approach to detailed studies of conflict processes, which includes constructivist elements. … This book is a very good source for students and scholars of political science, international relations and security studies interested in ethno-political conflicts, civil wars and violence in the South Caucasus region.” (Zinaida Shevchuk, Europe-Asia Studies, Vol. 67 (9), November, 2015)

"Souleimanov has produced here just the kind of objective study that the region and its well-wishers need, an impartial, critical, well-researched study that weighs both the historical evidence and the contending theoretical approaches to these conflicts that is necessary for their proper analysis. Both readers coming to these issues for the first time and experts in the field will benefit from his careful analysis [...] One can only hope that this work will also inspire political actors to renew their efforts to find satisfactory political solutions to these conflicts before we have a repletion of the events of 2008 that could only carry with them even greater negative repercussions for international security."

"Emil Souleimanov presents a definitive work on conflict in the region, analysing a wealth of hitherto unexamined issues and sources. Drawing on a range of case studies, Souleimanov offers a rich, thought-provoking, and empirically-grounded account of local and regional political dynamics. In so doing he enhances our understanding of the theories of ethnic conflict and civil war, analysing the onset and escalation of conflict, presenting a scheme for understanding periods of conflict, and exploring the crucial role of elites and their perception of opportunity in transforming low-scale ethnic riots into fully-fledged civil war. The book deserves to be, and will be, widely read and frequently cited."

"This book is one of the fullest accounts to date about ethnopolitical conflicts in the South Caucasus. It is an impressively theorized explanation set in a comparative perspective and explicitly related to the key debates in the field of ethnic politics, contentious mobilizations, and civil wars. Its findings are rigorously formulated, they are informed by advanced theoretical thinking, and these findings clearly have relevance to understanding the current political transformations in many countries both inside and outside the South Caucasus. A statement of theoretical maturation, empirical complexity and unbiased analysis, Souleimanov's book is definitely worth a read.

"This book is a must read for everybody interested in the South Caucasus, a complicated region at the crossroads of Europe and Asia that has seen a series of ethnic conflicts, civil wars, and geopolitical turmoil. Drawing on empirical detail, Souleimanov reflects on the vast array of current theories pertinent to the field of ethnic conflict and civil war, presenting an outstanding piece of research that improves our understanding of the causes, evolution, and outcomes of the regional conflicts in a broader context of the dissolution of the Soviet Union, the establishment of independent republics, and the roles played by external powers."

"The Caucasus region today receives growing attention among scholars and decision-makers. While the countries of the region have come through their second decade as independent states, the general situation in this region is far from stable or predictable. Five of the seven ethno-political conflicts in the former USSR have taken place in the Caucasus and three of the four de facto entities in the post-Soviet space have been found in the region. This highly professional book provides us a comprehensive account of the regional conflicts as well as their controversial dynamics. It is a valuable work demonstrating how the Caucasus risks impact on the wider international security environment."

"Professor Souleimanov's book gives a detailed account and an excellent analysis of the conflicts in the South Caucasus in the late 1980s-early 1990s, drawing on his encyclopaedic knowledge of the events and of the literature. It uses the evidence of the historical processes to test a range of social science theories about ethnic conflict, develop his own, and suggest ways for their improvement. Importantly, the book shows that while Russia may sometimes use the conflicts for its own advantage, neither it nor the Soviet Union created them, with the aim of dividing and ruling the Caucasus, as some analysts inside and outside the region allege.

"Souleimanov presents a valuable revisionist interpretation of the conflicts over Nagorno-Karabakh, Abkhazia and South Ossetia as well as other historical and political developments in this very important though understudied region of the world. This book combines analysis of theories of ethnic conflict and civil war with a readable and unbiased narrative history. Readers will have a much better understanding of the formation and manifestations of ethnic identity in the South Caucasus as well as the geopolitics of the region."