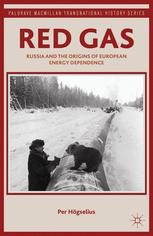 Russia and the Origins of European Energy Dependence

This book applies a systems and risk perspective on international energy relations, author Per Högselius investigates how and why governments, businesses, engineers and other actors sought to promote – and oppose– the establishment of an extensive East-West natural gas regime that seemed to overthrow the fundamental logic of the Cold War.

Per Högselius is Associate Professor of History of Technology and International Relations at the Royal Institute of Technology (KTH), Stockholm, Sweden. Earlier works include The Dynamics of Innovation in Eastern Europe (2005), among others, and he has published numerous book chapters and articles on related topics in Energy Policy, Utilities Policy, Europe-Asia Studies, and other academic and policy journals.

“Red Gas explores the origins and development of the Soviet Union’s (natural) gas industry during World War II, and its trade with Western Europe during the Cold War. … This is the first comprehensive, archival-based study in English of this fascinating and important topic. … Overall, Red Gas does answer the questions it poses, making for informative and enjoyable reading that researchers and policy analysts of Russian energy, Russo-European relations, and the Cold War will find valuable.” (Boris Barkanov, The Russian Review, Vol. 77 (1), January, 2018)

“Red Gas is organized into twelve chapters with the first and the last serving as an introduction and conclusion. … Red Gas is a timely study which highlights how local, national and international phenomenon created a truly ‘transnational’ system with a level of detail often missing from similar studies. … this book is a great resource not only for scholars of the European, Soviet and post-Soviet region but Europe more generally.” (Jacob Feygin, Journal of Contemporary History, Vol. 51 (1), 2016)

". . . Russian gas exports to Europe have been the province not of historians but of energy specialists and political scientists trying to keep up with fast-moving events. The return to history is welcome. Ho¨gselius is admirably equipped for it, comfortable in several languages and as happy explaining what happened to the methane molecules and steel pipes as with events in boardrooms and embassies." - American Historical Review

"Red Gas is a fascinating study into the background and nature of Europe's energy dependency on Russian natural gas. The volume benefits from a dispassionate treatment of a commendable breadth of archival sources, producing a prime example of transnational history, rich in present-day relevance." - Slovo

"Högselius has . . . made a timely contribution to an understanding of the historical, as well as current, factors which will continue to influence future commercial relationships between the EU and Russia, as the former continues to demand natural gas imports and the latter seeks to maximise income from exports of that commodity." - Journal of Contemporary European Studies

"The first comprehensive study of the flow of gas between the USSR and Europe, this excellently researched book tells the fascinating story how Western Europe's current dependence on Russian energy resources originated in the dynamics of the Cold War. It is a novel and eye-opening work, one that is truly important for students of history, environmental studies, and international relations." - Helmuth Trischler, Director of the Rachel Carson Center for Environment and Society, Munich, Germany

'"Red Gas is a pioneering contribution to transnational history writing. The book illustrates nicely that the 'Iron Curtain' was never as impenetrable as we might believe, and it proves unequivocally the catalytic power of infrastructures in overcoming ideological and national boundaries." - Mikael Hård, Professor of History of Technology, Darmstadt University of Technology, Germany

"Per Högselius demonstrates here both a mastery of archival sources in multiple languages and a deep appreciation for the challenges involved in Europe's 'hidden integration' - cultivating trust, reducing uncertainty, and replacing fear with interdependence. This is top quality transnational history." - Philip Scranton, Rutgers University, USA