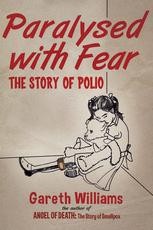 The Story of Polio

The story of mankind's struggle against polio is compelling, exciting and full of twists and pardoxes. One of the grand challenges of modern medicine, it was a battleground between good and bad science. Gareth Williams takes an original view of the journey to understanding and defeating polio.

Gareth Williams is Professor of Medicine and former Dean of Faculty at the University of Bristol, UK. He has written or co-authored over 20 books, including the Textbook of Diabetes (BMA Book of the Year, 1997) and has contributed to more than 30 others, including the Oxford Textbook of Medicine. Inspired by the life of Edward Jenner, Gareth wrote Angel of Death: The Story of Smallpox, which was shortlisted for the Wellcome Trust Book Prize in 2010.

"As Williams's punchy book reveals, the history of polio is quite an extraordinary one." - The Guardian

"Williams is good on the terror [polio] inspired...and strongest of all is Williams's highly entertaining description of the poisonous rivalry between scientists... His tale of vendetta and bitterness reminds us that even medical heroes can be as jealous and petty as the rest of us." - The Times

"A splendid book, riveting from beginning to end a model of its kind." - Literary Review

"An absorbing new history of the disease personal accounts are woven through the story with consummate skill." - Times Higher Education

"This book is a compelling story of how human ingenuity, ruthless competition, money and science have played a key role in driving polio to the brink of extinction." - New Internationalist

"An engaging narrative and critical commentary a great strength of the book is that all of the competing ideas are covered, giving the reader a wonderfully rich picture of 20th-century medicine in all its forms Paralysed With Fear can be recommended both as a wonderful biography of polio and a revealing story of the development of 20th-century medicine, warts and all." - BBC History

"There is plenty of drama in the polio story, and Williams's skills as a writer come to the fore here he has mastered his material and is at his best in explaining why the science and therapeutics were good and bad, and why it has been possible to think about the global eradication of this awful disease in the first place." - Times Literary Supplement

"Thrilling tale of man's war against polio...Williams does an excellent job in describing ambitious, vain and wrongheaded scientists; said scientists' feuds researchers who fell out of favour; horrible treatment trial fiascos; and FDR's fate, which served as quite the tool for bringing about what may be the biggest fundraising campaign of all time." - The Book Bag

"Authoritative and insightful, warm in tone and compulsively readable, Paralysed with Fear is a welcome addition to the Polio history canon." - British Polio Fellowship

"Gareth Williams' new book about poliomyelitis, and the attempts to follow the example of smallpox by eradicating a second dreaded infection from the world, is fascinating...a compelling read." - Professor Alasdair Geddes CBE

"A wonderfully enlightening read. It takes the reader on a long and exciting ride through the history of polio." - Dr Don Francis

"I would say this is a really great book for all the obvious reasons (that include diligent and clear research, and a clear narrative of the history of polio) but it is also great because it tells you about the reality of medical research." - Wendy Gagen, 'Reviews in History', the Institute of Historical Research

"A wonderful biography of polio and a revealing story of the development of 20th-century medicine, warts and all." - BBC History Magazine