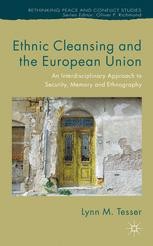 Ethnic Cleansing and the European Union

An Interdisciplinary Approach to Security, Memory and Ethnography

This book offers the first multi-case analysis of the politics of ethnic remixing in an expanding EU, including studies on Central Europe, the Balkans and Cyprus. Tesser explains the politics of minority return in a post-national Europe, with particular attention to the long-term aftermath of minority removal as a conflict resolution policy.

Lynn M. Tesser has spent over four years teaching and researching in Central Europe, the Balkans, and Cyprus. Tesser has held academic affiliations in the U.S., Germany, Poland, Bosnia-Herzegovina, Finland, and Cyprus, and received fellowships from the Fulbright Commission, Social Science Research Council, MacArthur and Mellon Foundations, among others. Her work on nationalism, EU expansion, and forced migration has been published in East European Politics and Societies, Communist and Post-Communist Studies, and Geopolitics. She holds a Ph.D. in political science from the University of Chicago, U.S.

"Lynn Tesser has written an important book that epitomizes the best traits of good comparative research: strong theoretical foundations and an engaging and innovative empirical structure. Her ability to cover diverse regions and periods has enabled her to provide us with crucial insights into how far Europe has come in its understanding of and responses to forced migrations, 'ethnic cleansing', and ultimately genocide. Tesser's disturbing and well-argued conclusion is: not nearly far enough."

"Tesser draws together a wide range of theoretical perspectives and combines them with rich historical detail to provide a fresh look at the politics of ethnic separation and subsequent remixing. Her thought provoking analysis will be of interest to students, researchers and policy makers concerned with nationalism and ethnic conflict."

''Academics will appreciate Tesser's clear exposition of her analytical framework whereby her quadratic nexus, with appropriate modifications, is likely to remain productive for the foreseeable future, whether by providing the impetus for eureka moments for those struggling to frame similar interdisciplinary, comparative projects or by raising scholarly hackles among students of politics, memory, regime theory and history.'' - Steven Jefferson, University of London (IMLR), UK

'[The book's] main contribution certainly lies in drawing readers' attention to the after-effects of the European politics of separation in the context of the current premium on European integration The book offers analyses of a considerable number of contexts: Poland; Czech Republic; Cyprus; Slovenia and Croatia; and Bosnia & Hercegovina. All case study chapters cover the history of each case's internationally sanctioned ethnic separation, threat perceptions and the politicisation of potential expellee return in the context of European integration. There are clear parallels between cases. Also, rich empirical detail is provided in support of Tesser's core argument which states that the variation between countries as regards the resurgence of ethnic tensions in the context of EU accession can be explained by variation in the 'quadratic nexus' (comprising geographical proximity, selective memory, expellee activism and pressures deriving from international integration).' - Ada-Charlotte Regelmann (2015) Ethnic Cleansing and the European Union. An Interdisciplinary Approach to Security, Memory and Ethnography, Europe-Asia Studies, 67:3, 507-509