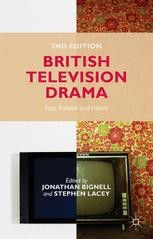 Past, Present and Future

Featuring leading scholars of British television drama and noted writers and producers from the television industry, this new edition of British Television Drama evaluates past and present TV fiction since the 1960s, and considers its likely future.

"The book not only brings academics and TV professionals together in the debate about televised drama but also provides a probing, but not over-technical introduction to the field of British Television Drama." - Christian-Martin Czypull, University of Hannover, European Journal of English Studies

"Overall this collection remains valuable reading for anyone interested in the academic and commercial analysis of television drama, with valuable new perspectives offered by the newly commissioned chapters." - Mark Fryers, University of East Anglia