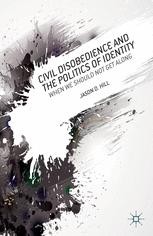 Civil Disobedience and the Politics of Identity

When We Should Not Get Along

Civil Disobedience and the Politics of Identity  is an attempt to provide criteria for when it is both morally necessary and politically expedient to break with civic harmony social cohesion in the name of a higher social justice.

Jason D. Hill is Professor of Philosophy at De Paul University in Chicago, USA. He is the author of Beyond Blood Identities: Post Humanity in the 21st Century (2009) and Becoming a Cosmopolitan: What it Means to be a Human Being in the New Millennium (2000). He is writing a book on cosmopolitanism and moral eugenics.

"Jason Hill invites us to reject a cultural defence of illiberal practices; he urges that the public acknowledgement of same sex love be equal to that of opposite sex love; he entreats a return to emancipatory feminist concerns about imposed dress codes; and he asks us to replace multicultural separatisms with a refreshed universalism. Hill links a readiness to explore these questions to the generation of cosmopolitan friendships that place hope and solidarity in our shared humanity. This is a daring and important contribution to a field of debate about how we should live with and talk to each other." - Glynis Cousin, Professor, University of Wolverhampton, UK

"Civil Disobedience and the Politics of Identity is an attack on multiculturalism in the name of cosmopolitan social democracy. Hill argues that individuals and not groups have rights and that the radical left has over-determined identity by neglecting the dignity of the self. Hill calls for a radical insurrectionism against homophobia, racism, xenophobia, and oppressive cultural practices such as the burka for women and the preservation of indigenous cultures that limit the freedom of their members. Civil Disobedience and the Politics of Identity will offend and infuriate many across the political and cultural spectrum, while it blazes new paths for inspired 'post-human cosmopolitanism' and personal expansion and moral growth. Written for an interdisciplinary academic audience, Hill's direct and incendiary prose will also engage iconoclasts and libertarians at large." - Naomi Zack, Professor, University of Oregon, USA

"Jason D. Hill is a liberal - an unapologetic, fiercely confrontational liberal. He affirms individual rights, and he denies virtually all attempts to subordinate individual rights in the name of something larger. This is especially true with respect to racial and ethnic groups, which, according to him, too often function as supreme arbiters, telling people, as individuals, what they can and can't think, what they can and can't do." - Notre Dame Philosophical Reviews

Book Title
Civil Disobedience and the Politics of Identity
Book Subtitle
When We Should Not Get Along
Authors
Copyright
2013
Publisher
Palgrave Macmillan US
Copyright Holder
Jason D. Hill