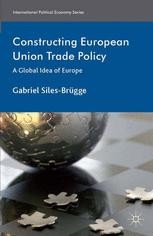 A Global Idea of Europe

With the stagnation of the Doha Round of multilateral talks, trade liberalisation is increasingly undertaken through free trade agreements. Gabriel Siles-Brügge examines the EU's decision following the 2006 'Global Europe' strategy to negotiate such agreements with emerging economies. Eschewing the purely materialist explanations prominent in the field, he develops a novel constructivist argument to highlight the role of language and ideas in shaping EU trade policy. Drawing on extensive interviews and documentary analysis, Siles-Brügge shows how EU trade policymakers have privileged the interests of exporters to the detriment of import-competing groups, creating an ideational imperative for market-opening. Even during the on-going economic crisis the overriding mantra has been that the EU's future well-being depends on its ability to compete in global markets. The increasingly neoliberal orientation of EU trade policy has also had important consequences for its economic diplomacy with the developing economies of the African, Caribbean and Pacific group of states.

"With its combination of theoretical rigour and deep empirical research Gabriel Siles-Brügge's volume delivers rich insight into the nature of EU trade policy and its changing orientations. This book is a 'must read' for anyone concerned with political economy of European integration and the external projection of the EU. It is also one of the very best books on trade politics published in the past decade, and a major contribution to the emerging canon of constructivist IPE." - Ben Rosamond, University of Copenhagen, Denmark

"A really major empirical and theoretical contribution to both constructivist international political economy and to the study of European integration - there is so much to learn from this impressive study which should become a core reference point in the literature." - Colin Hay, Professeur des Universites en Sciences Politiques, Sciences Po, Paris

"This book provides an innovative and up-to-date analysis of the EU's trade relations since the 'Global Europe' strategy. After two decades of research into institutionalist dynamics and interest groups lobbying within the EU, the author proposes a highly original critical and constructivist framework which brings 'ideas' (e.g. neoliberalism) and 'agents' (e.g. DG Trade) into the study of the EU's common commercial policy. Empirically, the book covers the major recent developments in EU trade policy through detailed case studies on the EU-Korea Agreement, the Economic Partnership Agreements, and the implications of the economic crisis. It is a well written and convincing reference work that should be read by anyone interested in EU studies and international political economy." - Jan Orbie, Professor in the rank of Senior Lecturer, Ghent University, Belgium

"In this fascinating book, Siles-Brügge offers a lucid explanation of the shift of EU trade policy towards bilateralism, a move called 'Global Europe'. Although frequently driven by lobbying demands of the services sector, 'Global Europe' is not merely a fancy label, but at the core a discourse that promotes a particular view of the EU as global actor. Moving the debate between critical theory and rationalist approaches forward, the book will be required reading for anyone interested in EU trade policy and EU governance more broadly." - Mark S. Manger, University of Toronto, Canada