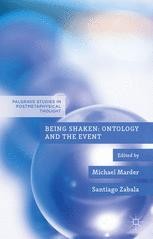 Being Shaken: Ontology and the Event

Being Shaken is a multifaceted meditation by leading philosophers from Europe and North America on ways in which events disrupt the complacency of the ontological paradigm at the personal, ethical, theological, aesthetic, and political levels.

"A much-needed articulation of the disruptive potential of "the event" in contemporary philosophy." - Simon Critchley, Hans Jonas Professor of Philosophy, The New School for Social Research, New York

"Working between the purported sturdiness of Being and the purported inscrutability of the Event, this refreshing and clear-headed volume runs us up against foundations, certainties, means, and ends that are neither given nor absent, but rather shaken - by trauma, injustice, techno-economic shockwaves, and the escalating convulsions of our exhausted earth. A rare conjunction of ontology and embodiment; a hermeneutics of and for the shaken." - Mary-Jane Rubenstein, Associate Professor of Religion at Wesleyan University and author of World's Without End and Strange Wonder

"The Owl of Minerva has taken flight - philosophy is always too late. Yet, we are always confronted by the shock of the novelty of world. We are always coming to the world. Every birth is a coming to the world, anew. The world is always being made new. Being is the novum. Between this always already and this not yet, we stand 'shaken' we are this shakenness, this standing out on the edge of the having been and the not yet become. Every birth is traumatic, but so is enduring existence. Philosophy, thus, has not yet arrived. Philosophy is always arriving. Philosophy is by definition nonsynchronous to the extent that it is also atopos. For this reason, philosophy is the remembrance of the way we are always suffering from the drama of becoming through having been. There is always the philosophy of those who will come after us. Marder and Zabala have put together a fascinating, insightful, moving, shaking and disturbing collection of essays by some of the most incisive and provocative thinkers of our recent times, which are perishing from a lack of urgency. These essays invite us to think about this trauma of having been, of becoming, of not yet become. Allow yourself to be jolted." - Eduardo Mendieta, Stony Brook University

"This book is an event in and of itself. Its impressive collection of essays breathes new life into the dusty domains of metaphysics and ontology. It is a long overdue reckoning with the violence and injustice that permeate the philosophical tradition, as well as the contemporary world. Being Shaken will shake philosophers out of apathy and, hopefully, into action." - Martin Woessner, The City College of New York, author of Heidegger in America