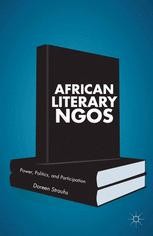 Proposing the novel concept of the "literary NGO," this study combines interviews with contemporary East African writers with an analysis of their professional activities and the cultural funding sector to make an original contribution to African literary criticism and cultural studies.

Doreen Strauhs is a professional with The German National Academic Foundation, Germany's largest organization sponsoring highly gifted students of outstanding academic achievements. She has been published with Wasafiri, The Journal of Commonwealth Literature, and Kunapipi. From 2006 to 2012, she worked in the East African NGO-sector and conducted research in Kenya, Uganda, and the USA on the contemporary generation of East African writers.

'This book is a very valuable addition to the scholarship available in the area of African Literature. It frequently highlights the numerous challenges faced by writers working in the postcolonial setting. Strauhs's analysis of the role of LINGOs in the development of literature in the region is focused and highly organized, concentrating on the role of LINGOs in defining the direction of literature and socio-cultural debate in Africa.' - Abasi Kiyimba, Professor, Department of Literature, Makerere University, Uganda

'Doreen Strauhs makes an important and ground-breaking addition to our understanding of African writing in English. While we simply assume that writers write and readers read, this book exposes the complex network of patronage, support, and organization that enables African writing to be written, to be published, and to be read. It is a valuable addition to the library of any scholar of African literature.' - Bill Ashcroft, Australian Professorial Fellow, School of the Arts and Media, The University of New South Wales, Australia

'Based on original research, this book offers an insightful assessment of the thriving literary scene in East Africa and the vital role played by literary organizations in furthering new talents. In her discussion of KWANI Trust (Kenya) and FEMRITE (Uganda), Strauhs provides a valuable interdisciplinary framework for understanding the political and social importance of literary NGOs from the 1960s to the present. Her book makes a timely contribution to the study of writers' networks in Anglophone East Africa.' - Marie Kruger, Associate Professor, University of Iowa, USA

'Strauhs's book is an important contribution to the on-going project of configuring the East African literary archive, past and present. In her meticulous tracing of multiple voices, moments, and creative thrusts across Kenyan and Ugandan literary histories, Strauhs maintains a sensitive finger on the rich pulse of ideas, institutions, and creative impulses at work across the region. This book is much more than a thought-provoking biography of KWANI Trust and FEMRITE: it is a tribute to East African writers' daring imagination.' - Grace A. Musila, English Department, Stellenbosch University, South Africa