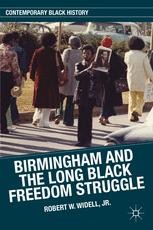 Birmingham, Alabama looms large in the history of the twentieth-century black freedom struggle, but to date historians have mostly neglected the years after 1963. Here, author Robert Widell explores the evolution of Birmingham black activism into the 1970s, providing a valuable local perspective on the "long" black freedom struggle.

'Widell captures the spirit of Birmingham in the 1970s in this book. He rightly connects the organizing of the 1970s to the marches of the 1960s and the protests of the 1930s. Generations of working people in Birmingham, led by African American men and women, sustained this historic movement for economic and social dignity that continues to this day.' - Alex Hurder, Clinical Professor of Law, Vanderbilt University Law School

'Using a rich array of new sources and focusing on heretofore-unknown activists, Widell has filled a yawning gap in our understanding of the civil rights movement in Birmingham. In the process, he has made a brilliant contribution to the still emerging body of scholarship that explores African Americans' painstaking efforts to make real the promise of the national legislative reforms that emerged from the 1963 Birmingham campaign.' - George Derek Musgrove, Assistant Professor of History, University of Maryland Baltimore County, USA

'Meticulously researched, this book moves us - indeed, pushes us - beyond the iconic events of 1963 to reveal a broad, deep, multilayered movement that bristled with action long after Martin King's departure. Widell eloquently and convincingly reinserts Birmingham into the ongoing conversation about the long civil rights movement that flourished not just in the South, but across the nation well into the 1970s. This is history at its best.' - Charles W. McKinney, Jr., author of Greater Freedom: The Evolution of the Civil Rights Struggle in Wilson, North Carolina

'In taking us beyond the iconic Birmingham of 1963 - in scope and in time - Widell has challenged our still too narrow view of the civil rights movement and of the black freedom movement generally. Grounding his story of black radicalism in the labor, legal, and political history of a key Southern city, his book allows us to glimpse the complex Black Power moment of the late 1960s and early 1970s as a historical phase of a much larger and longer struggle. The result is an important contribution to the historiography of modern America.' - Jama Lazerow, Wheelock College

'This book is a priceless contribution to understanding grassroots social movements. Drawing on the narratives of working class African Americans, Widell demonstrates that the Birmingham Movement that riveted the nation in 1963 endured well into the Reagan Era as community organizers articulated demands for economic justice, unionism, Black Power and other goals.' - Paul Ortiz, author of Emancipation Betrayed and Director of the Samuel Proctor Oral History Program at the University of Florida, USA