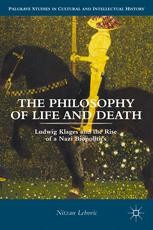 The Philosophy of Life and Death

Ludwig Klages and the Rise of a Nazi Biopolitics

Some of the first figures the Nazis conscripted in their rise to power were rhetoricians devoted to popularizing the German vocabulary of Leben (life). This fascinating study reexamines this movement through one of its most prominent exponents, Ludwig Klages, revealing the philosophical-cultural crises and political volatility of the Weimar era.

Nitzan Lebovic is Associate Professor of History and Apter Chair of Holocaust Studies and Ethical Values at Lehigh University, USA. His other publications include Zionism and Melancholia: The Short Life of Israel Zarchi (in Hebrew, 2015), The Politics of Nihilism (co-editor, 2014), Catastrophe: A History and Theory of an Operative Concept (co-editor, 2014), and special issues of Rethinking History (Nihilism), Zmanim (Religion and Power), and The New German Critique (Political Theology).

“It does so through an inquiry into the life and work of Ludwig Klages (1872-1956), the most influential and famous twentieth-century figure of Lebensphilosophie (Philosophy of Life). Lebovic’s book displays a mastery of sources, both published and unpublished, and I am confident it will serve as a resource for decades to come. Indeed, this book is the most synoptic and elaborate study of Klages presently available.” (Martin Shuster, German Studies Review, Vol. 39 (2), 2016)

"It should be seen as one of the strengths of Lebovic's book that, despite its openly polemical approach to Klages, it also provides material for his defense. More importantly, Lebovic shows how much of our contemporary thinking takes place within a conceptual framework informed by 1920s Germany, even making a case for the view that Lebensphilosophie still retains a 'revolutionary potential.'" - TLS

"This is an important work that follows, for the first time, the reception of Ludwig Klages's thought. Lebovic is a true political thinker, who uses the whole array of analytical possibilities, in order to expose the violent potential of his 'hero.' Equally important, Lebovic explores the [history] of the term biopolitics. Lebovic's work, whose importance for the English readership cannot be overestimated, - for there is no comparable work in this field - clarifies the destructive impact of this thinking, but beyond it, its appeal to a wide variety of audiences." - Literaturkritik

"Ludwig Klages is long overdue for a critical study. Exceedingly brilliant, highly original, and always unconventional, he has been called 'the most fashionable philosopher of his age.' Klages straddled cultural and intellectual worlds from the pre-World War I Munich bohème, to the Nazi elite, influencing virtually everyone of note from Simmel to Adorno. Nitzan Lebovic's singular achievement is to map the career of this extraordinary figure without losing sight of his paradoxes and labyrinthine itinerary." - Anson Rabinbach, Princeton University, USA

"Nitzan Lebovic's study of Ludwig Klages' 'Life philosophy' is a major contribution to the history of contemporary German thought and to one of the essential components of Nazi ideology." - Saul Friedlander, Distinguished Professor of History (emeritus), University of California-Los Angeles, USA

"Nitzan Lebovic's Philosophy of Life and Death is really four books in one: easily the best study available of the life and work of Ludwig Klages; a discerning analysis of the rhetoric and appeal of Lebensphilosophie; a provocative argument about the conjunction between this historical moment in the genealogy of biopolitics and current discussions of the topic under very different political signs; and an analysis of a key episode in the history of the peculiar intimate enmity between certain radical left and right thinkers in Europe's twentieth and twenty-first centuries. It's an important book on all four counts." - John McCole, Associate Professor, Department of History, University of Oregon