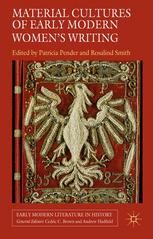 This collection examines the diverse material cultures through which early modern women's writing was produced, transmitted, and received. It focuses on the ways it was originally packaged and promoted, how it circulated in its contemporary contexts, and how it was read and received in its original publication and in later revisions and redactions.

“This fascinating collection of essays, edited by Patricia Pender and Rosalind Smith, explores the material cultures of early modern women’s writing as a new way of examining production, transmission and reception. … The editors are to be congratulated for assembling such a tightly focused, conceptually vibrant and coherent volume. … Read as a whole, the collection makes an invaluable contribution to the history of the book and adds a genuinely gendered dimension to scholarship interested in material texts.” (James Daybell, English Historical Review, Vol. 131 (552), October, 2016)

“Essays in the volume explore the systems of textual production, transmission, and reception that influenced and enabled early modern women writers. … The essays are generally of a very high quality, many written by some of the best scholars working on early modern women writers. … Not only do the essays illuminate the writers under consideration, they also offer innovative ways of thinking about the act of writing.” (Studies in English Literature 1500-1900, Vol. 56, 2016)

“This collection of essays concerns itself with notions of authorship in the context of the materiality of books and manuscripts. … The examination of shared credit in print culture is much in vogue these days, but this particular collection works well and is a pleasure to read. … The collection is both useful and readable. It sometimes surprises and does not disappoint.” (James Fitzmaurice, Renaissance Quarterly, Vol. 68 (4), 2015)