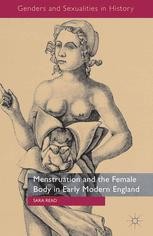 Menstruation and the Female Body in Early Modern England

In early modern English medicine, the balance of fluids in the body was seen as key to health. Menstruation was widely believed to regulate blood levels in the body and so was extensively discussed in medical texts. Sara Read examines all forms of literature, from plays and poems, to life-writing, and compares these texts with the medical theories.

Sara Read is a Lecturer in English in the Department of English and Drama, Loughborough University.

"Sara Read's study of menstruation and women's blood in early modern England is a hard-working contribution to a specialised aspect of social history concerned with women's sexuality and reproductive functions . . . What gives the book its time-specific focus is the written evidence for social attitudes to women's bleeding in the 16th to 18th centuries, evidence drawn from medical handbooks, letters, diaries and, unexpectedly, court cases." - Times Higher Education

"An interesting and imaginative discussion that went beyond menstruation to explore the fuller understanding of "transitional bleedings" in an age of humoral medicine. We liked the way in which [the book] drew upon a range of sources, including personal writings, medical texts, court reports and literary works." - June Hannam, Convenor of the Women's History Network Prize Panel, 2014

"Although blood loss within the reproductive life cycle may not be a subject for the faint-hearted, Read's meticulous approach to recovering women's voices makes this book an enjoyable and enlightening read, and Read challenges a range of stock assumptions about early modern women's private lives using documentary evidence." - Ashleigh Blackwood, Northumbria University, UK in Writing Women