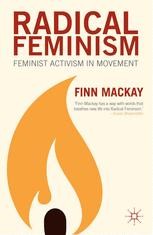 Feminism is not dead. This groundbreaking book advances a radical and pioneering feminist manifesto for today's modern audience that exposes the real reasons as to why women are still oppressed and what feminist activism must do to counter it through a vibrant and original account of the global Reclaim the Night March.

Finn Mackay founded the London Feminist Network and revived the London Reclaim the Night in 2004, which sparked a national resurgence of this protest. She has been involved in feminist activism for 20 years and in 2006 was nominated by The Guardian as one of the UK's "World Changing Women". After a career in policy work on domestic violence prevention, she is now Lecturer in Sociology at the University of the West of England, UK.

"Amidst all the lies and distortions about the radical feminist movement here comes a truthful account of its proud history, and where we are today. A brave and compelling book." - Julie Bindel, author and feminist activist

"Convincing ... clear and succinct. Mackay's energy in rebuilding the feminist movement that she wants to see has been quite remarkable. This book, which is her account of the successes and challenges of this task, is a useful undertaking, and places it within its historical background and current global reach." Lynne Segal, Times Higher Education

"Tireless activist and rigorous philosopher Finn Mackay takes on the hot-button issues in this new book. She has a way with words that breathes new life into Radical Feminism. I agree with her 96 percent of the time." - Susan Brownmiller, author of Against Our Will: Men, Women and Rape

"Today's younger feminists will find this new book useful and inspiring. This is the kind of book that soon to be wonder women have on the shelves for years to come with pride. I would recommend this book to all new to feminism and those of us that want to give the next generation something to ensure they start on the right foot. I will be buying a copy for my niece." - Nimco Ali, Daughters of Eve and The Girl Project

"Finn Mackay studies the movement from the point of view of the women's marches; the highs of those moments; the nib of organizing - she knows all the angles. Mackay is a great organizer herself - she would be fun to know." - Kate Millett, author of Sexual Politics

"Finn Mackay ... is well-known among feminists for her energy and positivity as a campaigner, her practical approach to political organizing and her ability to speak in a straightforward, engaging way to both feminist and general audiences. All those qualities are also visible in her book." - Debbie Cameron, Trouble & Strife

"Radical Feminism is [an] interesting text looking into recent feminist organisations and the political questions they face. Mackay's ... dedication to a movement which seeks to highlight an important issue and empower women cannot be doubted." - Socialist Review

"A powerful new book by a former Menwith Hill peace camper, grounded in dozens of interviews with feminist activists around the UK. Radical Feminism provides a guide to the development of the women's liberation movement since the 1970s, deals with the challenges of queer theory, and centres itself in the history and politics of the Reclaim The Night marches against male violence against women." - Peace News