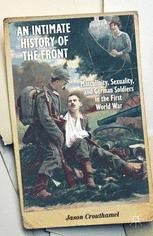 An Intimate History of the Front

Masculinity, Sexuality, and German Soldiers in the First World War

This eye-opening study gives a nuanced, provocative account of how German soldiers in the Great War experienced and enacted masculinity. Drawing on an array of relevant narratives and media, it explores the ways that both heterosexual and homosexual soldiers expressed emotion, understood romantic ideals, and approached intimacy and sexuality.

Jason Crouthamel is an Associate Professor at Grand Valley State University, USA. He is also the author of The Great War and German Memory: Society, Politics and Psychological Trauma, 1914-1945.

“Crouthamel’s fine work contributes to understandings of modern masculinity, European sexualities, the history of emotions, and World War I. The passionate stories it contains and its accessible and lively style would make it a good fit for an undergraduate or graduate seminar on World War I or European masculinities.” (Lisa Fetheringill Zwicker, American Historical Review, Vol. 121 (4), October, 2016)

“One of the remarkable exceptions in the most recent wave of publication at the centenary of the war is the monograph Intimate History of the Front: Masculinity, Sexuality and Ordinary German Soldiers in the First World War, published in 2014 by the American Jason Crouthamel, who works on German and European history … . Crouthamel’s book is a must-read for anyone interested in the history of the First World War from a gender perspective.” (Karen Hagemann, German History, June, 2016)

“Crouthamel provides a valuable contribution to the scholarship of both history and gender studies by investigating the spectrum of masculinity expressed by German soldiers in World War I. Especially interesting is his treatment of women’s roles in managing the emotional and psychological lives of the soldiers. … The depth of coverage as well as its accessibility makes Crouthamel’s work suitable for both scholars and students working on the effects of war trauma on gender identity.” (Barbara Hales, German Studies Review, Vol. 39 (2), 2016)

"Crouthamel makes an important contribution to First World War scholarship. Rather than simply endorsing the 'crisis of masculinity' notion that historians have perpetuated, he deftly separates civilians' expectations of masculinity from soldiers' lived experience to argue for a 'spectrums of masculinity' approach. As a result, An Intimate History of the Front emphasizes soldiers' ability to negotiate and challenge hegemonic ideals of masculinity on their own terms." - Erika Kuhlman, Director of Women's Studies, Idaho State University, USA

"Crouthamel's excellent study on how German soldiers experienced, endured, and communicated the 'chaotic universe in the trenches,' and on how they often failed to adopt the heroic, self-sacrificing male warrior ideals, breaks new ground. It avoids any simple generalization of a common 'frontline experience,' and instead leads the reader into a sensitively written analysis of a given broad spectrum of masculinities, which emerged from trench warfare in World War I."

'Brilliantly and unerringly written a key work for understanding the complex modes in which rigid images of pre-war masculinities were challenged by the creative and twisted ways in which German soldiers in the First World War experienced, enacted, expressed, and reflected upon the 'intimate universe' of their shifting emotions, gender identities, and performances, as well as wartime sexual experiences and perceptions. Crouthamel unfolds the iridescent spectrum of tested gender roles and masculinities at war with skillful subtlety.'

'Exploring a widely neglected aspect of the history of the First World War, Jason Crouthamel illuminates the emotional and symbolic world of homosexual German frontline soldiers and their creative agency in transcending the boundaries of traditional martial and heterosexual gender clichés. A ground-breaking study, a must-read for all students of military history, gender history, and modern German history.'