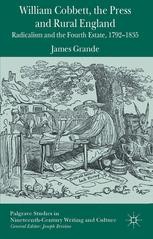 William Cobbett, the Press and Rural England offers a thorough re-appraisal of William Cobbett (1763-1835), situating his journalism and rural radicalism in relation to contemporary political debates.

James Grande is a British Academy Postdoctoral Fellow at King's College London, UK. He completed his undergraduate and graduate degrees at Oxford and worked as a research assistant on the digital edition of William Godwin's diary (2010). He is one of the editors of The Opinions of William Cobbett (2013).

“James Grande’s engaging and beautifully written narrative blends stories from William Cobbett’s life and letters along with scholarly analysis of highlights from Cobbett’s twenty million published words. … Like Cobbett Grande cares about language. But he’s a better writer. This is a model for students and academics looking for a style to emulate.” (John Gardner, Notes and Queries, Vol. 63 (2), June, 2016)

“James Grande’s conceptually nuanced and compelling study adds an epistolary dimension to the range of recent scholarship engaging with Cobbett’s multifaceted cultural project. … William Cobbett, the Press and Rural England significantly develops what is already a formidable body of scholarship on the most influential contemporary English prose writer of the Romantic period. … this major new study is more than simply a synthesis and presentation of valuable archival research.” (Alex Benchimol, The BARS Review, Issue 48, Autumn, 2016)

"William Cobbett, the Press and Rural England is a compelling and passionate narrative history of particular dramatic episodes in Cobbett's radical career that rather rare thing, an academic page-turner. This is not only because the episodes themselves were so extraordinary, and Cobbett's radical personality, as manifested in his writings, so powerful, but also because Grande writes with real fluency and passionate flair. It is also the case that, as well as an intriguing biography-in-episodes, the book is fully informed by both literary critical and Marxist historical research into Cobbett and early 19th century radicalism." Tim Fulford, De Montfort University, UK

"Grande... sees borad coherence in Cobbett's career, and is as interested in continuity as he is in contradiction. Such an approach runs the risk of smoothing complexity too absolutely; he avoids this by rooting his argument in sensitive readings of Cobbett's private correspondence as well as his published work. The archival basis of the book allows Grande to chart the connections between Cobbett's disparate body of work in ways which are both imaginative and illuminating." Daisy Hay, Times Literary Supplement