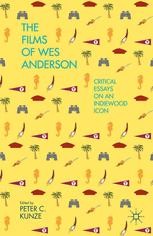 The Films of Wes Anderson

Critical Essays on an Indiewood Icon

Wes Anderson's films can be divisive, but he is widely recognized as the inspiration for several recent trends in indie films. Using both practical and theoretical lenses, the contributors address and explain the recurring stylistic techniques, motifs, and themes that dominate Anderson's films and have had such an impact on current filmmaking.

'Kunze's collection offers a broad array of critical responses to Wes Anderson's films - from their quirky sensibility, their portrayal of idiosyncratic characters, their relation to neoliberal fantasies, and the importance of music to Anderson's collaboration with Noah Baumbach. The Films of Wes Andserson is invaluable for bringing us much closer to understanding Anderson's significance as an American Indiewood filmmaker." - Warren Buckland, Reader in Film Studies, Oxford Brookes University, UK

"Spanning a diverse range of perspectives on a figure who is now undoubtedly recognized as the icon of the indie era, this collection valuably complicates and challenges the generalized notions of Wes Anderson that characterize popular opinion. It is essential reading for anyone seeking to understand the work of this director as more than merely 'whimsical.'" - Claire Perkins, Film and Television Studies, Monash University, USA, and author of American Smart Cinema

"Appropriately, the essays collected in this volume provide an array of perspectives on a filmmaker whose work consistently fights against isolation. It is fitting indeed that the first serious book-length exploration of Anderson's work is a truly collaborative effort. Including fourteen essays from fourteen distinct points of view, the reader comes away from Kunze's collection with a sense of the filmmaker and his unusually inclusive worldview, as well as a sense of respect for the power of a critical conversation (as opposed to the monologue)." - Devin Orgeron, Associate Professor, Director of Film Studies, North Carolina State University, USA, and author of "La Camera-Crayola: Authorship Comes of Age in the Cinema of Wes Anderson"