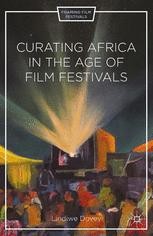 Curating Africa in the Age of Film Festivals

Tracing the history of Africa's relationship to film festivals and exploring the festivals' impact on the various types of people who attend festivals (the festival experts, the ordinary festival audiences, and the filmmakers), Dovey reveals what turns something called a "festival" into a "festival experience" for these groups.

Lindiwe Dovey is Senior Lecturer in African Film and Performance Arts at the University of London, UK.

“Dovey’s book provides a crucial intervention by incorporating the responses of actual audiences, instead of the audiences constructed by film texts or assumed by scholars. … Essential reading for all film scholars, Curating Africa in the Age of Film Festivals enriches our understanding of African cinema and the event of the film festival and opens up exciting areas for future research.” (Carmela Garritano, Research in African Literatures, Vol. 47 (3), 2016)

"Artfully crafted, Lindiwe Dovey successfully combines field research, critical insight and theoretical rigour to provide a highly complex web of analysis. This book provides a further dimension to cinema studies' theoretical approach by recognizing that it is not just the content but also the framing of content that is intrinsic to the manufacturing of meaning and the circulation of manufactured-meanings that is produced through international film festival exhibition circuits. Filmmakers, film scholars, and film curators equally will find this text enlightening." - Jyoti Mistry, Associate Professor, Wits School of Arts, University of the Witwatersrand, South Africa

"A highly original contribution to the study of African screen media, and an intriguing account of the curatorial practices mobilized for defining 'African film' on film festival circuits. Dovey's book provides the most comprehensive review to date of Africa's place in African, African diasporic, and European film festivals. Any scholar interested in the positioning of African arts writ large, nationally and globally will find this an engaging and thought-provoking work." - Moradewun Adejunmobi, University of California, Davis, USA"Original and meticulously researched, Curating Africa in the Age of Film Festivals is indispensable reading for scholars and students of African film. It brings African film studies into conversation with film festival studies to investigate film festivals as sites of meaning creation and (dis)sensus communis. Written in lively and evocative prose, this interdisciplinary book engages with a range of writers and theorists to suggest exciting new possibilities for defining and researching African cinema." - Carmela Garritano, Associate Professor, African Studies and Film Studies, Texas A & M University, USA

"Drawing from her extensive fieldwork, Lindiwe Dovey incisively examines the modes in which the continent and its affiliated films and filmmakers are selectively represented within international and regional festivalscapes. In this vital book, Dovey reveals intertwined and divergent case histories as she considers questions of festivalized audience and/as agency - and possibilities of meaning-making, resistance, dialogue and debate, consensus-building, identity-assertion, and participatory spectatorship through curated communal film-viewing." - Anne Ciecko, University of Massachusetts-Amherst, USA