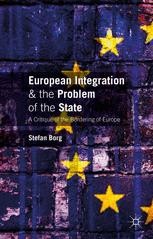 European Integration and the Problem of the State

A Critique of the Bordering of Europe

“In his book, Stefan Borg examines European integration by looking at the discursive construction of the European Union (EU), applying an analytical, theoretical and empirical research-based perspective. … The book is essential reading for all students with an interest in European Studies.” (Adrian Favero, JCMS Journal of Common Market Studies, 2017)

“Stefan Borg’s new book offers an original entry point into the maze of EU ontology. … Borg’s volume is engaging, well-structured and nicely written. … Modularity makes the book, or excerpts taken from it, suitable assignments for students in their late master or early graduate school classes. Outside academia, it may well cater to EU experts and practitioners with a taste for politically engaged theorisation.” (Furio Stamati, LSE Review of Books, February, 2016)

''This book is an important and essential contribution to understandings of identity, the state and alternative political, economic and social orders, of which the European Union is offered as the primary contemporary example. Borg's timely and critical reflection on the nature of European integration and the processes by which the EU's identity has been created highlights the state-like nature of this entity including the exclusions and violences. In doing so, important questions are raised about the novelty of the EU as mode of organising political and economic life and about its capacity to escape the ethical contradictions that plague the nation-state form.'' - Professor Roxanne Lynn Doty, School of Politics and Global Studies, Arizona State University, USA

''The EU has long been seen as a major challenge to the modern territorial society of states. In this masterful volume, Stefan Borg develops an overdue antidote to the prevailing discourse. His argument that the EU is engaging in statecraft makes a prime contribution to the debate about the EU as a normative power in world politics. Future theorising of the EU's international role cannot ignore Borg's forceful reasoning.'' - Professor Thomas Diez, Department of Political Science, University of Tuebingen, Germany