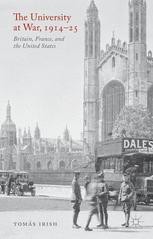 Britain, France, and the United States

Drawing on examples from Britain, France, and the United States, this book examines how scholars and scholarship found themselves mobilized to solve many problems created by modern warfare in World War I, and the many consequences of this for higher education which have lasted almost a century.

“Tomás Irish presents a stimulating contribution to a newly blossoming field that takes university history beyond institutional narratives and national frameworks. … Relating the different perspectives through a sound structure and a clear line of argument creates a rich and vibrant picture. It opens new vistas on university culture in war, intellectual mobilisation and the subtle ebbs and flows of political currents in the academic world. It also makes the book a truly rewarding read.” (Charlotte A. Lerg, History of Education, December, 2016)

“In this wide-ranging account Tomás Irish makes a convincing case that World War I profoundly changed the university systems in Britain, France, and the United States, and, as a result, universities and their scholars have become essential to the war-making capacities of modern states in Europe and North America. … this is a skillful telling of a complicated story that deserves a wide readership.” (Gerald E. Shenk, Journal of American History, Vol. 103 (2), September, 2016)

"This book is an excellent account of the mobilization of British, French, and American universities in war and peace. It is a major contribution to the cultural history of the 1914-18 conflict and its aftermath." - Jay Winter, Yale University, USA

"The Great War, we are constantly reminded, was above all a war of brains as well as bravery. In this vast international struggle, universities around the world were mobilized. In this much-needed comparison of Allied and American universities, Dr Irish reveals the depth and direction of the role of the university in the Great War, and explores the tensions that have threatened to fracture the future of internationalism. It is a compelling story, and one that should find a place on every scholar's shelves." - Roy MacLeod, University of Sydney, Australia