Palgrave Studies in the History of Childhood
Free Preview 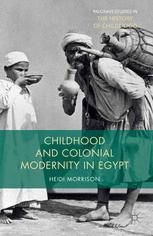 Childhood and Colonial Modernity in Egypt

This book examines the transformations of Egyptian childhoods that occurred across gender, class, and rural/urban divides. It also questions the role of nostalgia and representation of childhood in illuminating key underlying political, social, and cultural developments in Egypt.

Heidi Morrison is Assistant Professor of History at the University of Wisconsin, La Crosse, USA. She is the editor of The Global History of Childhood Reader (2012).

“This work situates children’s lives and agency within the local frame of Egypt and in so doing contributes to a growing body of work on ‘non-western childhoods.’ … this is a pioneering work on a highly important and much-neglected topic. No doubt Childhood and Colonial Modernity in Egypt will pave the way for what may very well blossom into a new school for childhood studies in Egypt and the wider region of the Middle East and North Africa.” (Linda Herrera, The Journal of the History of Childhood and Youth, Vol.10 (1), 2017)

'Heidi Morrison's Childhood and Colonial Modernity in Egypt is a groundbreaking work. It is the first monograph to chart a modern history of childhood in the Middle East. It explores uncharted sources, such as children's press, children's literature and memoirs, to portray a rich fabric of an intimate domain of modernity. Morrison portrays children as actors in Egypt's modern history and thus examines how the everyday of modernity was experienced. In doing so, her narrative weaves together history and memory, both personal and national. The book takes gender seriously as a category of analysis and explores its interaction with age and class. Morrison also takes emotions seriously, by integrating them into the analysis and by foregrounding empathy as a vital tool of the historian's toolkit.' - Liat Kozma, author of Policing Egyptian Women.

"This is a beautifully written account of changing ideas and constructions of childhood in early twentieth-century Egypt. Based on contemporary autobiographies, magazines and children's literature, Morrison paints a fascinating and compelling picture of children's lives which will appeal to historians, anthropologists and anyone interested in different childhoods in different places." - Heather Montogomery, Open University, UK

"Drawing on the children's press and literature, and on the autobiographies and writings of Egypt's literate classes, Morrison accounts for modern Egyptians came to record their childhood as a distinct period in their personal development. Using childhood as a category of historical analysis, Morrison contextualizes and analyzes those Egyptians' reflections on their increasingly state-prescribed roles in state building and colonial resistance. The result is not only an engaging history of the emergence of the category of childhood in modern Egypt, but also a critical account of the Egyptian nation's journey from colonial childhood to independent maturity." - Lisa Pollard, The University of North Carolina, Wilmington, USA