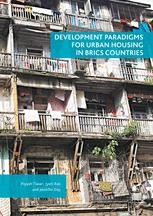 This book is a concise treatise of the alternative paradigms used in BRICS countries to tackle urban housing shortages. There are a number of alternative methods for meeting these shortages which BRICS countries have adopted. These alternatives may agree in terms of desired outcome, but when it comes to approach, mechanics and scope, they are entirely divergent. By focusing on the political economy and the international structure of each BRICS country, these perspectives present alternative and often conflicting approaches to the attainment of better housing.
Development Paradigms for Urban Housing in BRICS Countries explores the various political, economic, institutional and cultural factors that have shaped the housing outcomes in BRICS countries that we see today. The book uses a framework which allows comparison between Brazil, Russia, India, China and South Africa, whilst recognizing the differences in the development path that each of these countries has taken.

Piyush Tiwari is Professor of Property at the University of Melbourne, Australia. Prior to his current position he was Director of Policy at Infrastructure Development Finance Company (IDFC), India, where he was involved in contributing policies for the private financing of urban infrastructure in close cooperation with national and state governments. He was previously Senior Lecturer of Property at the University of Aberdeen, UK. His research and consulting interests include infrastructure policy, housing economics and mortgages, commercial real estate investment, and financing infrastructure in developing countries.

Jyoti Rao is an early career researcher pursuing doctoral research at the University of Melbourne, Australia. She is interested in issues related to housing and land economics, and most of her publications are in related fields. She is co-author of India's Reluctant Urbanization (2015, Palgrave Macmillan) and a contributor to The Towers of New Captital (2015, Palgrave Macmillan). She is professionally trained as an architect, urban planner and real estate professional in India and the UK. Previously she was an assistant professor at the RICS School of Built Environment, Noida, India, and has been involved in the GIFT city project in Gujarat, India.

Jennifer Day is Senior Lecturer in Urban Planning at the University of Melbourne, Australia. She has a PhD in City and Regional Planning from the University of California, USA, and a master's degree in Civil Engineering from San Jose State University, USA. She is interested in the forces that compel growth and change in cities. Her doctoral research examined welfare changes for center-to-periphery movers in Shanghai, and subsequent work has focused on models of urban change using spatial statistics, the impact of city growth on rural welfare, and the modes of urbanization at the urban fringes.div>