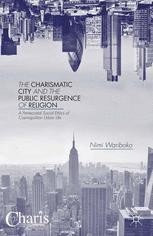 The Charismatic City and the Public Resurgence of Religion

Two powerful and interrelated transnational cultural expressions mark our epoch, Charismatic spirituality and global city. This book demonstrates how these two forces can be used to inform ethical design of cities and their common social lives to best support human flourishing, spirituality, and social and ecological wellbeing of their residents.

Nimi Wariboko is the Katherine B. Stuart Professor of Christian Ethics at Andover Newton Theological School. His academic research focuses on economic ethics, continental philosophy, and pentecostal studies. He is the author of The Pentecostal Principle (2012) and God and Money: A Theology of Money in a Globalizing World (2008).

"Nimi Wariboko clearly shows in The Charismatic City and the Public Resurgence of Religion that he is a deep thinker and a reliable socio-theological critic of contemporary religion. He has demonstrated this quality in his many works on interpreting Pentecostalism for a global age. This book is an interdisciplinary work that provides an in-depth response to the interface of religion and urban development in the modern era. Very few scholars can surpass his academic penchant for expanding the theoretical scope of previous classics such as Tillich and Cox as he does in The Charismatic City and the Public Resurgence of Religion. But in doing so Wariboko succeeds in bringing these works alive and up to date on the current concerns for how cityscapes in the global context deal with the emerging ethical, political, and religious challenges of our time." - Jacob K. Olupona, Professor, African Religious Traditions, Harvard Divinity School, Professor, African and African American Studies, Harvard University, USA

"Nimi Wariboko performs in his writing the explosive energy and affective effervescence that characterize his not yet/already New Jerusalem. The Charismatic City as book, as concept, and as living place bursts through the networks and rhizomes of a new Pentecostal cosmopolitics. Inasmuch as it links the liveliest global Christianity to interreligious and ecological ethics, I find its charism stunning, unexpected, and somehow crucial to the work of postsecular political theology." - Catherine Keller, Professor, Constructive Theology, Drew Theological School, USA and author of On the Mystery: Discerning Divinity in Process (2008)

"Wariboko's The Charismatic City and the Public Resurgence of Religion is a powerful meditation on the intersection of Pentecostal existence and urban existence. This is not a sociological or geographic study but it will greatly inform such studies by offering a very lively and theological rich reflection on the multiple meanings of embodied life in cities, especially cities in and outside the United States. I know of no other text that reflects on African Pentecostal urban life with such breath and sophistication. This will be a book that will be referred to and commented on for many years." - Willie James Jennings, Associate Professor, Theology, Black Church Studies, Duke Divinity School, USA

"Fifty years after The Secular City it was time for a sequel to appear, one that would both update and focus the structural changes in religion, politics, and the economy that have rattled and transformed life on earth. This eloquent and readable book does just that. Closely in touch with global trends, the growing Charismatic-Pentecostal movement, and the restless hunger of the human spirit, Wariboko has given us a penetrating work that no thoughtful reader can afford to miss." - Harvey Cox, author of The Secular City (1965) and The Future of Faith (2009)

"In The Charismatic City and the Public Resurgence of Religion, Nimi Wariboko, perhaps the leading living Pentecostal theologian and social historian of our time, puts forth a compelling vision that echoes the prophesies of the Revelation of John and forces us to revise our understanding of the fragmentation and resurgence of religion in our cities. Through his theological and ethical reflection on the City, Wariboko both disrupts and calls us to reconstruct the shape of civilization in our increasingly globalized world. Religion has long been connected with the life of cities and has been a critical subject of philosophical and theological analysis for centuries. Following on the works of Aristotle, Weber, Tillich, Cox, and Ward, Wariboko challenges previous thinking and offers a new approach to an emerging global civil society where humankind sometimes encounter an ecstatic experience of God in our urban centers. Wariboko reconstructs our social theology and moves beyond classic Trinitarianism to help us understand the sovereignty of God and the centrality of Christ in modern life. This is an important work for clergy, professionals engaged in urban planning and development, and anyone interested in the holy pluralism that can shape civilization." - Max L. Stackhouse, Princeton Theological Seminary, USA