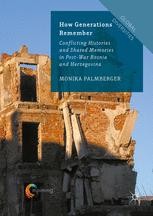 Conflicting Histories and Shared Memories in Post-War Bosnia and Herzegovina

This book is open access under a CC BY 4.0 license.

This book provides a profound insight into post-war Mostar, and the memories of three generations of this Bosnian-Herzegovinian city. Drawing on several years of ethnographic fieldwork, it offers a vivid account of how personal and collective memories are utterly intertwined, and how memories across the generations are reimagined and ‘rewritten’ following great socio-political change. Focusing on both Bosniak-dominated East Mostar and Croat-dominated West Mostar, it demonstrates that, even in this ethno-nationally divided city with its two divergent national historiographies, generation-specific experiences are crucial in how people ascribe meaning to past events. It argues that the dramatic and often brutal transformations that Bosnia and Herzegovina has witnessed have led to alterations in memory politics, not to mention disparities in the life situations faced by the different generations in present-day post-war Mostar. This in turn has created variations in memories along generational lines, which affect how individuals narrate and position themselves in relation to the country's history. This detailed and engaging work will appeal to students and scholars of anthropology, sociology, political science, history and oral history, particularly those with an interest in memory, post-socialist Europe and conflict studies.

“How Generations Remember, based on intensive, long-term field research, is an original contribution to an ever-growing literature on memory. That the focus of inquiry should be on how different generations give different shape and distinctive content to their narratives is argued and shown compellingly.” (Johannes Fabian, University of Amsterdam, the Netherlands)

“In this insightful work Monika Palmberger illustrates the distinctive memories of the formation, existence, and breakup of Yugoslavia held by people of different cohorts, simultaneously clarifying the conceptualization of historical memory in general and offering a thick description of social identity and political division in contemporary Mostar.” (Michael Lambek, University of Toronto Scarborough, Canada)

“This book adds markedly not only to our empirical knowledge about post-war Bosnia and Herzegovina, but to our understanding of how generations work as agents of memory and how the individual and collective are inextricably intertwined.  It is thus simultaneously a sensitive and compelling ethnography and an important theoretical contribution.  A very impressive achievement!” (Jeffrey Olick, University of Virginia, USA)

“Postwar Bosnia and Herzegovina, and the divided city of Mostar in particular, are often considered to be marked by competing collective ethnonational memories. Based on long-term ethnographic research, Monika Palmberger demonstrates that these are far from monolithic. This evocative study provides sensitive insights into how persons of different generations position themselves with regard to official histories, and thus how they locate themselves in the present and orient themselves to the future. How Generations Remember is an important contribution to the study of contemporary Bosnia and Herzegovina and to our understandings of memory work more generally.” (Stef Jansen, University of Manchester, UK)