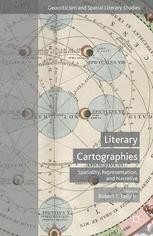 Exploring narrative mapping in a wide range of literary works, ranging from medieval romance to postmodern science fiction, this volume argues for the significance of spatiality in comparative literary studies. Contributors demonstrate how a variety of narratives represent the changing social spaces of their world.

"We are accustomed to thinking of maps as narratives as visual accounts of the cultures that produce them. But the wide-ranging, incisive essays in Robert J. Tally's interdisciplinary new collection not only reverse this proposition by reading narratives as maps, but they go a step further to suggest that map-making is what narratives do: they are 'mapping machines'." - Modernism/modernity

"This is a timely and exciting collection, edited by a leading light in the field of literary cartography and geocriticism. Literary Cartographies is ambitious in its scope (both geographic and temporal), but beautifully focused on its central question: the 'degree to which the writing of literary texts is itself a cartographic endeavor.' The collection takes the reader from the spaces and spatiality of medieval narratives to those of globalised postmodernity, with each essay not only focusing on the particularities of their individual time-space-text nexus, but also making an important contribution to the central problematic. Literary Cartographies will be an important and defining text in the field of literary cartography." - Peta Mitchell, Senior Research Fellow, Creative Industries Faculty, Queensland University of Technology, Australia

"This is a valuable and timely collection. At a moment when spatial theory has well and truly come of age and has become an established subdiscipline within textual studies, not to mention the critical humanities as a whole, this volume provides a useful glimpse of the state of the art. It does not merely give an overview of possible spatial approaches to a broad range of literary periods, genres, and traditions. More provocatively, it shows literary spatial analysis testing its own limits and turning a critical gaze upon its own assumptions and methodologies. It thus demonstrates how disciplinary innovation can continue to whet its cutting edge and sharpen its sense of intellectual adventure." - Russell West Pavlov, Professor of English, University of Tübingen, Germany

"Literary Cartographies is a superb volume that establishes geocriticism as an exciting and innovative approach to literary studies. The book is capacious in its coverage, with a set of stimulating essays that discuss topics such as medieval narrative, ocean liners in modernism, and mapping in fiction about Tokyo. This volume shows wonderfully the many subtle ways in which spatiality is a key feature of all literary texts." - Andrew Thacker, Professor of English, Nottingham Trent University, UK