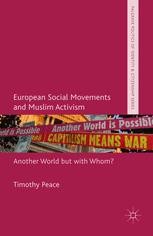 Another World but with Whom?

How do progressive social movements deal with religious pluralism? In this book, Timothy Peace uses the example of the alter-globalisation movement to explain why social movement leaders in Britain and France reacted so differently to the emergence of Muslim activism.

Timothy Peace is Lecturer in Comparative European Politics at the University of Stirling, United Kingdom.

“One of the very few texts on this subject, the author explores how secular left-wing activists respond to Muslims within alter-globalization movements, using Britain and France as case studies. …  a significant contribution to increasing understanding of how a multiple, overlapping set of institutions that includes the media, academia and politicians (mis)represent Muslims.” (Sadek Hamid, Patterns of Prejudice, Vol. 51 (2), March, 2017)

“This book makes an important contribution to the field of European social movement studies and addresses some of the key issues around globalization, austerity and how these movements have been constructed with Muslim minorities. … This historical account is important because it provides the context within the emergence of religious actors within alter-globalization movements.” (Imran Awan, Ethnic and Racial Studies, Vol. 39, July, 2016)

“Peace’s path-breaking book is the first cross-national study of Muslim activism within European social movements. … The book is flawlessly organized and enjoyably detailed. … ‘European Social Movements and Muslim Activism. Another World but With Whom?’ is an excellent and inspiring book, rigorous and enjoyable, which deconstructs and exposes a series of assumptions on both Muslim activism and the alter-globalisation movement in Europe.” (Alberta Giorgi, Partecipazione e Conflitto, Vol. 9 (1), March, 2016)

“European Social Movements and Muslim Activism compares the contrasting relationship of Muslim activists in Britain and France to what Peace dubs the ‘alter-globalization’ movement (AGM) in preference to the more familiar ‘anti-globalization’ movement which he regards as imprecise. … this is a welcome study that provides a serious examination of Muslim participation in a significant social movement.” (Yahya Birt, The Muslim World, Vol. 37 (1), 2016)

"In this rich study, Timothy Peace bridges two fields of research: social movements and the politics of religion. His book provides an original analysis of the successes (and failures) of the participation of Muslim activists in the protest campaigns of the Global Justice Movement. Comparing two classical cases, France and Great Britain, his work goes beyond existing knowledge of the effects of citizenship regimes on political participation by looking at the mechanisms that explain the different reactions of social movements when faced with diversity. This is an important contribution to social movement studies." - Professor Della Porta, European University Institute, Italy

"As Timothy Peace aptly demonstrates in this ground-breaking work, religion is not necessarily the enemy or the contrary of progressive action [...] At a time when Islam is often considered as a threat, and reduced to radical violence, this is a very refreshing book."- Professor Michel Wieviorka, Fondation Maison des Sciences de l'Homme, France