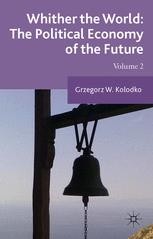 Whither the World: The Political Economy of the Future

The study deals with challenging questions of long-term future of global economy and the mankind. Focusing not only on what happens in the economic sphere but also on cultural, social, political, demographic, technological, and ecological processes. It employs a holistic approach to answer fundamental questions about the course of the future.

Professor Grzegorz W. Kolodko (www.volatileworld.net), intellectual and politician, a key architect of Poland's successful reforms, the founder and Director of TIGER Center – Transformation, Integration and Globalization Economic Research at the Kozminski University, Warsaw, is the author of international bestsellers 'From Shock to Therapy: The Political Economy of Postsocialist Transformation' and 'Truth, Errors, and Lies: Politics and Economics in a Volatile World'. His books and papers have been translated in 25 languages. He is a marathon runner and a globetrotter who's explored over 160 countries.

“An erudite and thought-provoking take on the big questions facing humanity.” (John Cassidy, The New Yorker)

“A wise and probing tour of the horizons ahead, taking in demography, technology, resources, war and human folly. Kolodko argues that to survive well, the rich economies must learn how to prosper while slowing down. And yes, if we could only find and zap that neoliberal gene, we might have a better chance.” (James K. Galbraith, author of “The End of Normal: The Great Crisis and the Future of Growth”)

“In this compelling volume, Dr. Grzegorz Kolodko combines academic expertise and a distinguished record of government service during crucial periods of Poland's economic reforms. Ranging across genres and never shying from controversy, he has written a useful contribution to the literature on economics, social change, and 21st-century world order.” (Dr. Henry A. Kissinger, Nobel Peace Laureate)

“Grzegorz Kolodko is one of the most acute observers of the international economy, based on long experience both as a practitioner and as an academic. His writings are always an important starting point for debate and discussion about the political economy of globalization.” (Prof. Francis Fukuyama, Stanford University, USA)

“Professor Kolodko the best established in the world Polish economist from whom we can learn new ideas surprises again. After thorough 'Truth, Errors, and Lies', in his new book he reaches into the future. This is not another forecast, but a knowledgeable exercise and intellectual adventure touching the most important challenges faced by the mankind. He is right that the best way to solve the current difficulties is through attacking the long-term problems.” (Prof. Nouriel Roubini, New York University, USA)

“Dr. Kolodko delivers comprehensive and inspiring economic analysis, drawing on his rich historical political leadership. His probing and insightful assessment of globalization in today's and tomorrow's world is a must read.” (Rev. Jesse L. Jackson, Sr., President of Rainbow/PUSH Coalition and an International Civil Rights Activist)

“Professor Kolodko is an independent economic thinker. What's more, for several years he presided over Poland’s transformation from planned to market economy and as experienced politician led his country to the European Union, thus this book is indeed worth considering.” (Prof. Justin Yifu Lin, Beijing University, former First Vice-President for Development and Chief Economist of the World Bank)

“In his latest book Whither the World Grzegorz Kolodko, having completed in the first two volumes of his trilogy a tour de force theorisation of the state of the world and its evolution, addresses the even more challenging exploration of the future. His is not, and could not be, a rash and arbitrary prediction, nor a horoscope, but an exploration of feasible, desirable futures on the assumption that mankind will pursue an approach of "rational pragmatism". This is therefore not a trivial exercise in crystal-ball-gazing but an important contribution to the construction of a better world.” (Professor Mario D. Nuti, London Business School, UK & Universita di Roma 'La Sapienza', Italy)