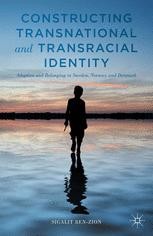 Adoption and Belonging in Sweden, Norway, and Denmark

Norway, Sweden, and Denmark are home to more than 90,000 transnational adoptees of Scandinavian parents raised in a predominantly white environment. This ethnography provides a unique perspective on how these transracial adoptees conceptualize and construct their sense of identity along the intersection of ethnicity, family, and national lines.

Sigalit Ben-Zion is an independent scholar based in Israel. She is the author of A Roadmap to the Heavens: An Anthropological Study of Hegemony among Priests, Sages, and Laymen (2008).

"This uniquely crafted study far transcends its ethnographic objective of depicting the life worlds of Scandinavian transracial adoptees. The understated tension between the tranquil waters of integration, assimilation, and loyalty on the one hand and the turbulent undercurrents of a sense of belonging to visions of another culture on the other engenders an unexpected troubled identity. In a measured and unassuming manner, Ben-Zion unfolds that color-based predicament as she dismantles run-of-the mill categories such as kinship, embodiment, ethnicity, and nationality. The scholarly, civil, political, and cultural lessons that can be drawn from this finely tuned, sensitive sound box of these different voices of reluctant otherness are tellingly constructive as well as disturbing." - Haim Hazan, Professor of Sociology and Social Anthropology, Tel Aviv University, Israel

"Sigalit Ben-Zion takes the reader on a reflexive and thoughtful journey through the worlds, visions, and insights of transracial adoptees in Scandinavia. Outlining the complexities and ambiguities of belonging from the perspective of their voices, it is a timely book that takes the task of giving people a voice in social sciences more serious than many others. When I started reading, I could not stop until the end of the book - that does not happen often!" - Erdmute Alber, Professor of Social Anthropology, University of Bayreuth, Germany