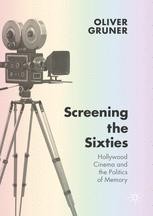 Hollywood Cinema and the Politics of Memory

This book provides a detailed and engaging account of how Hollywood cinema has represented and ‘remembered’ the Sixties. From late 1970s hippie musicals such as Hair and The Rose through to recent civil rights portrayals The Help and Lee Daniels’ The Butler, Oliver Gruner explores the ways in which films have engaged with broad debates on America’s recent past. Drawing on extensive archival research, he traces production history and script development, showing how a group of politically engaged filmmakers sought to offer resonant contributions to public memory. Situating Hollywood within a wider series of debates taking place in the US public sphere, Screening the Sixties offers a rigorous and innovative study of cinema’s engagement with this most contested of epochs.

Oliver Gruner is a Senior Lecturer in Visual Culture at the University of Portsmouth, UK. He has written on subjects including the historical film, the Sixties and cultural memory. His work has been published in the journals Rethinking History and the Historical Journal of Film, Radio and Television as well as various edited collections.

“The book volume can definitely serve as a useful example for those who work around representation, public memory, and politics, whether on the Sixties in particular or not. … Screening the Sixties is an impressively elaborate exploration of ‘the Sixties as a commemorative palimpsest upon which divergent narratives have been written and rewritten throughout the 1970s, 1980s, 1990s and 2000s’ … .” (J. Van Belle, Communications, Vol. 43 (01), 2018)

“Screening the Sixties: Hollywood Cinema and the Politics of Memory, by Oliver Gruner, is a superb work on the intersection of film, history, and memory. It is not just the best book that I have read on Sixties film, it is one of the best studies of its kind on any period. What is amazing to me is the author’s ability to deal with so many shifting different discourses over time – film, history, politics, gender, and race – and yet produce an incisive study. Gruner is not only remarkably fluent in multiple theories of social and political development, he also well understands the mutable landscapes of films in development.” (Robert A. Rosenstone, Professor Emeritus of History, California Institute of Technology, USA)

“This is a thoroughly researched and engagingly written study of Hollywood films about the Sixties. Screening the Sixties contains wonderfully perceptive film analyses and is always sensitive to the changing contours of political culture in the United States. Yet the book’s most important contribution to the scholarly debates about public memory, American politics and Hollywood’s historical imagination is the attention and understanding it brings to the craft and art of script writing. Oliver Gruner gives the reader unique access to the creative process through which the stories that Hollywood tells take shape. By detailing the different ways the Sixties have been reconstructed by, and have come to matter to, script writers and directors as well as to Americans more generally, he demonstrates the ongoing importance of this period of profound cultural, social and political transformation.” (Peter Krämer, University of East Anglia, UK, author of “The New Hollywood: From Bonnie and Clyde to Star Wars”)