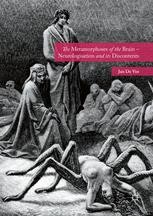 The Metamorphoses of the Brain – Neurologisation and its Discontents

What are we exactly, when we are said to be our brain? This question leads Jan De Vos to examine the different metamorphoses of the brain: the educated brain, the material brain, the iconographic brain, the sexual brain, the celebrated brain and, finally, the political brain. This first, protracted and sustained argument on neurologisation, which lays bare its lineage with psychologisation, should be taken seriously by psychologists, educationalists, sociologists, students of cultural studies, policy makers and, above all, neuroscientists themselves.

“Psychology has always reached the public imagination from its inception as an academic, professional, or popular field, to its latest incarnation in the guise of neuroscience. The psychological imagination always went beyond pure “data” and engendered interpretations that moved normatively into all areas where and how humans conduct their lives. Challenging the neo-metaphysics of the brain sciences, Jan De Vos assesses the ideology of neurologisation and makes convincingly the case for the critical relevance of the psychological humanities.” (Professor Thomas Teo, Department of Psychology, York University, Canada)

“This book is a tour de force, combining a thorough grasp of contemporary neuroscience with a caustic critical sensibility nourished by Freud and Zizek, and a literary canon that ranges from Ovid’s Metamorphoses to Kafka’s "Metamorphosis.”   The question it raises is deceptively simple:  what does it mean that we not only “have” a brain, but that it has now displaced mind, soul, and spirit as the key to what humans are.  One might expect a reactionary call for a return to old-fashioned humanism, but de Vos gives us instead a bold, well-informed critique of the new model of cranial subjectivity, complete with acerbic reflections on contemporary neuropolitics, sex in the brain, and neuroplasticity.” (W. J. T. Mitchell, Professor of English and Art History, University of Chicago, USA)