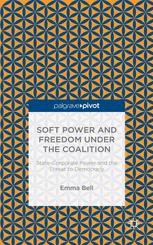 Soft Power and Freedom under the Coalition

State-Corporate Power and the Threat to Democracy

This study of five key policy areas, from welfare reform to foreign policy, demonstrates that the Conservative-Liberal Democrat coalition failed to fulfil its promise to reverse the rising power of the State. It exercised more subtle forms of 'soft power', often in partnership with the private sector, and to the detriment of ordinary citizens.

Emma Bell is senior lecturer in British Studies at the Université de Savoie where she teaches courses on British history and politics, focusing particularly on neoliberal consensus politics. Her research on different aspects of state authoritarianism attempts to understand policy in its wider social and political context. She has published widely in France and the UK. Her last book Criminal Justice and Neoliberalism (2011) focused on penal authoritarianism under the New Labour governments. She is the current coordinator of the European Group for the Study of Deviance and Social Control.

"A fascinating exploration case by case, act by act, and in both foreign and domestic policy of how a shrunken, negative, corporate-friendly definition of freedom came to dominate Coalition thinking and dash the hopes of those who hoped that May 2010 might turn out to be a genuinely 'liberal moment' for the UK." Tim Bale, Professor of Politics, Queen Mary University of London, UK

"The Coalition Government promised a new era of liberty to replace the dark night of New Labour. Emma Bell contrasts the claims made by Coalition leaders with the policies they actually delivered, and argues that in most areas the continuities with Labour are more marked than the changes. This is a challenging, provocative study which deserves to be widely read and discussed." Andrew Gamble, University of Cambridge, UK

"This book provides a sharply observed and sobering analysis of the Coalition's legacy. Emma Bell's analysis meticulously exposes the lie that this Coalition is, or ever was, interested in decentralising power and encouraging individual freedom. It shows with impressive precision and accuracy how the most vulnerable have been cruelly and harshly punished for a economic mess that has been created by a power hungry elite. The result has been a gradual, brutal, reversal of the post-war consensus to restore levels of inequality that Margaret Thatcher could never have dreamed of." David Whyte, University of Liverpool, UK