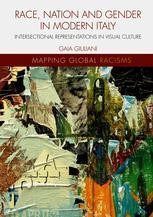 Finalist for the 2019 Edinburgh Gadda Prize

This book explores intersectional constructions of race and whiteness in modern and contemporary Italy. It contributes to transnational and interdisciplinary reflections on these issues through an analysis of political debates and social practices, focusing in particular on visual materials from the unification of Italy (1861) to the present day. Giuliani draws attention to rearticulations of the transnationally constructed Italian ‘colonial archive’ in Italian racialised identity-politics and cultural racisms across processes of nation building, emigration, colonial expansion, and the construction of the first post-fascist Italian society. The author considers the ‘figures of race’ peopling the Italian colonial archive as composing past and present ideas and representations of (white) Italianness and racialised/gendered Otherness.

Students and scholars across a range of disciplines, including Italian studies, political philosophy, sociology, history, visual and cultural studies, race and whiteness studies and gender studies, will find this book of interest.
Show all
About the authors

Gaia Giuliani is a Researcher in Postcolonial Studies at the Centro de Estudos Sociais, University of Coimbra, Portugal and a Founding Member of the Interdisciplinary Research Group on Race and Racisms, University of Padova, Italy. She has published widely in the areas of race, nation and gender in Italy.

“This is an important and incisive volume on the unmarked hegemony of white heteronormativity in the making of modern Italy, producing a cultural and political register that is so ubiquitous as to appear invisible. The merit of this richly researched work is to bring to light from the archive the multiple modalities in which race and gender are  consistently expunged from the narration of the nation. Giuliani provides innovative interdisciplinary critical perspectives for all of us who are thinking, unpacking and contesting the visual economy of the racialised cultural consensus that has become the question of our time.” (Iain Chambers, University of Naples, Italy)

“An indispensable book. Gaia Giuliani’s acute analytical intelligence dissects the grammar of the gendering and racializing practices that have pervaded visual representations in modern Italian history from the colonial to the postcolonial period. Her analysis of a host of films, documentaries, and televisions shows reveal troubling continuities as well as telling discontinuities in the affirmation of the somatic norm of the Italian ‘imagined community.’ If we want to understand some of the roots of the racism that pervades Italian society today, we need to read this book.” (Silvana Patriarca, Fordham University, USA)

“Gaia Guliani belongs to a generation of scholars that have powerfully challenged and transformed the approach to the study of race and racism in Italian history and present. Introducing the critical angle of whiteness, in particular, she has opened new avenues for the investigation of the Italian imagined community’s constitutive relations with its multiple others. Working through an amazing amount of textual and visual materials, Race, Nation and Gender in Modern Italy traces the multiple, heterogeneous, and uncanny mutations of the colonial archive from the Fascist age up to our present. In times of violence, war, and migration this is a book that deserves to be read well beyond the academia.” (Sandro Mezzadra, University of Bologna, Italy)

“Drawing upon a wide range of theoretical and methodological approaches, Giuliani’s Race, Nation and Gender in Modern Italy offers substantive, critical insights into the construction and circulation of racial ideologies in contemporary Italy. Giuliani mines Italy’s ‘colonial archive’, both local and transnational, to reveal the historical production of ‘racialized Others’ and its contribution to the reproduction of Italy as a ‘homogeneously white country’. This nuanced study moves beyond traditional racial dichotomies to explore how race is inscribed within culture and becomes a “relational construct” used to create modes of inclusiveness that nevertheless mark immigrants and Muslims as outside the national fold. In a moment of reactionary politics within Italy and greater Western Europe, Race, Nation and Gender in Modern Italy is a significant and timely contribution to Italian cultural and postcolonial studies.” (Shelleen Greene, University of California, Los Angeles, USA)