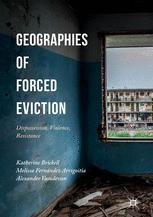 This book offers a close look at forced evictions, drawing on empirical studies and conceptual frameworks from both the Global North and South. It draws attention to arenas where multiple logics of urban dispossession, violence and insecurity are manifest, and where wider socio-economic, political and legal struggles converge. The authors highlight the need to apply emotional and affective registers of dispossession and insecurity to the socio-political and financial economies driving forced evictions across geographic scales. The chapters each consider the distinct urban logics of precarious housing or involuntary displacements that stretch across London, Barcelona, Rio de Janeiro, Shanghai and Colombo. A timely addition to existing literature on urban studies, this collection will be of great interest to policy makers and scholars of human geography, development studies, and sociology.

“Across the world, in the names of 'progress', 'reconstruction' or  gentrification,  systematic violence is routinely used to evict millions of  people from their hopes every year. Increasing inequality and precarity, combined with increasingly militarised  policing, mean that such violence becomes more war-like at every turn. And yet the global scourge of forced evictions is barely recognised.  This remarkable volume will help change all that. Encompassing a searing range of analyses and case studies from cities as diverse as London, Rio, Accra, Berlin and Shanghai, 'Geographies of Forced Eviction' is a pivotal critique that demands to be  read by anyone interested in the future of our fast-urbanising planet.” (Stephen Graham, Professor of Cities & Society, Newcastle University, author of “Cities Under Siege”)

“This volume makes a unique and important contribution that inaugurates a new focus on the geographies of eviction. It demonstrates that eviction is central to the operation of urban capitalism, but that its drivers, experiences, and geographies vary across the Global South and North. In doing so, it shows that eviction moves through and interconnects different registers, from the political economies of land redevelopment and the politics of law, to violence and insecurity, bodies and trauma, gender and class, and resistance and solidarity.” (Dr Colin McFarlan, Department of Geography, University of Durham)

“A must read for those concerned by today’s growing numbers and diverse modes of eviction. The authors move in depth into a broad range of places and circumstances across the world. They expose the innards of these expulsions.” (Saskia Sassen, Columbia University, author of “Expulsions”)

“There are signs that academic and public interest in vulnerability seems to be burgeoning, yet it remains an under-researched concept. With interesting and engaging contributions incorporating a mix of practitioner and academic authors on vulnerability and policing, this collection will have broad appeal.” (Dr Kate Brown, Lecturer in Social Policy & Crime, University of York, UK)

“Money is the motive for organized crime and the essential ingredient for terror. Yet our efforts to “follow the money” have proven inadequate. In this impressive collection of essays, diverse experts explore distinct but interlocking aspects of our efforts to combat financial crime. The result is a valuable study of AML/CFT and a collective argument that it is time to fundamentally shift the paradigm.” (John Cassara, former U.S. intelligence officer, Treasury Special Agent, and AML/CFT author)

“The shift of emphasis in fighting serious crime and addressing the treats of terrorism from the investigation and prosecution of substantive offences, to pursuing wealth associated with things we don’t like, has created a new dimension to the criminal justice system. Within which the focus is on interdicting and disrupting the flow of funds within criminal and subversive structures and placing obligations on those who mind other people’s wealth to generate intelligence. Three eminent scholars - Professors Walker, King and Gurulé have assembled a galaxy of experts in this ‘biblical work’ on almost every conceivable aspect of what is one of the most dynamic and - if you handle wealth, highly significant concerns. A unique and astounding feat of intellect and perception!” (Barry Rider OBE LLD, Professorial Fellow, Centre of Development Studies, University of Cambridge, UK)