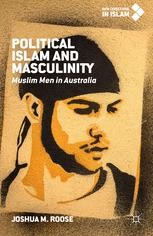 The question of Muslim identity–and, more specifically, Muslim masculinities, political loyalty, and action–has become the central pivot for the debate on the place of Islam in the West, state polices on multiculturalism, and even foreign policy towards the Middle East. Young, western-born Muslim men are central figures in these questions, yet their lives and identities remain poorly understood. Political Islam and Masculinity: Muslim Men in Australia reveals important and timely insights into why young Muslim men, often from very similar social backgrounds, are pursuing such dramatically different political paths in the name of Islam. Based on an unprecedented depth of engagement and quality of sources, this book examines the key social influences behind exceptional examples of political action by young Australian Muslim men who have extended their reach into the international realm, from the streets of Jakarta to the battlefields of Syria and Iraq.

Joshua M. Roose is Research Fellow at the Institute for Religion, Politics, and Society at the Australian Catholic University and Visiting Scholar at the East Asian Legal Studies Program at Harvard University Law School, USA. He is Secretary of the Australian Sociological Association and has written numerous articles on Muslims in the West, Islamic law, and society and multiculturalism.

“At a time when acts of violence, usually involving young men, are taking place all over the world, in both Muslim-majority and Muslim-minority contexts, it is very good to have this valuable study of Muslim men, their formation, and their widely-differing understandings of Islam, in the Australian context.  Roose's study of hip-hop band 'The  Brothahood', public intellectual Waleed Aly, and 'radical' group the 'Benbrika Jama'ah' (named after their Algerian-born founder), all in the context of their Australian background, illustrates the wide range of ways in which Islam is interpreted and practised in a significant region of the world. Along the way, issues of gender, mental illness, and conversion are all ably and subtly discussed, so the volume is a fine beginning for Palgrave's new series 'New Directions in Islam'.” (Hugh Goddard, Professor and Director of the HRH Prince Alwaleed bin Talal Centre for the Study of Islam in the Contemporary World, University of Edinburgh, and Secretary of the British Association for Islamic Studies)

“This book reports on the outcomes of several qualitative studies of young Muslim men in Australia. An equal attention is given to those who have achieved success in public life and those who have chosen extremism and a violent path. Although the studies were carried out in a rigorous scientific way the book should be understandable to readers who have no training in sociology.  I can strongly recommend it to everybody who wants to gain an improved understanding of social circumstances of Muslim youth today. It should be particularly valuable to policy makers and those working in government agencies that deal with multicultural issues.” (Lazar Stankov, Professor of Psychology, Australian Catholic University , Australia)

“An Impressive Work.” (Greg Austin, Professor in the Australian Centre for Cyber Security at the University of New South Wales (Canberra), Australia)