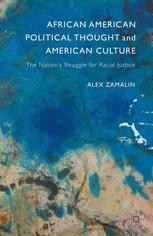 The Nation’s Struggle for Racial Justice

"For too long 'white' American political theory has reigned unopposed, in a tradition from Thomas Jefferson to John Rawls either overtly racist or at best race-evasive, despite (or maybe because of?) the centrality of race to the construction of the US polity. In this valuable contribution to a growing body of work rediscovering and reclaiming an oppositional African American tradition, Alex Zamalin shows how the fiction and essays of James Baldwin, Ralph Ellison, and Toni Morrison can be read as a bold political challenge to this white evasion of the responsibility of dealing with racial injustice and a mapping of a new emancipatory vision for all Americans." - Charles W. Mills, John Evans Professor of Moral and Intellectual Philosophy, Northwestern University, USA

'Alex Zamalin carefully traces how three towering yet still under-appreciated American intellectuals James Baldwin, Ralph Ellison, and Toni Morrison re-centered the idea of political change on strenuous, critical self-examination looking fearlessly upon one's own 'emotional limitations, undemocratic commitments and unseen moral attachments.' American political science often pretends that we can transform the polity simply through deft management of external forces. Baldwin, Ellison, and Morrison teach that no change worth the name can come without an unflinching look at one's own vulnerability, one's own investments in injustice, one's own attempts to escape freedom. A searching and perceptive book.' - Jack Turner, Associate Professor of Political Science, University of Washington, author of Awakening to Race (2012)

"In this insightful volume, Alex Zamalin shows how the works of James Baldwin, Ralph Ellison and Toni Morrison offer profound resources for anyone seeking to understand American political culture. Zamalin engages the powerful challenges of African American political thought to make visible what too many whites disavow about the relays between politics and ethics in contemporary America. Extending beyond critique, readers are confronted with energizing visions of what it might mean to consciously embody freedom as a practice." P.J. Brendese, Assistant Professor of Political Science, Johns Hopkins University, USA

"This is an important intervention in the contemporary conversation on race and democracy. The book places recent events, such as the killing of Michael Brown in Ferguson, Missouri, in the context of a conversation about the larger political project that is America. In discussing the works of Baldwin, Ellison, and Morrison, the author argues for the importance of a particular intellectual tradition in the contemporary politics of race in American society. The nuanced discussion is both accessible to the reader interested in learning more about how race impacts democratic ideals, and provides original and incisive claims that will be of great interest to scholars of political theory, race, and democracy." - Utz Mcknight, Associate Professor of Political Science, University of Alabama, USA