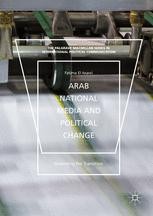 This book examines the evolution of national Arab media and its interplay with political change, particularly in emerging democracies in the context of the Arab uprisings. Investigated from a journalistic perspective, this research addresses the role played by traditional national media in consolidating emerging democracies or in exacerbating their fragility within new political contexts. Also analyzed are the ways journalists report about politics and transformations of these media industries, drawing on the international experiences of media in transitional societies. This study builds on a field investigation led by the author and conducted within the project “Arab Revolutions: Media Revolutions,” covering Libya, Tunisia, and Egypt.

• Fatima El-Issawi is Senior Lecturer in Journalism at the University of Essex and Assistant Professorial Research Fellow at the Middle East Centre of the London School of Economics and Political Science (LSE). She has been leading research projects on Arab media under transition in the context of the Arab Spring. She currently leads the research project “Arab National Media and Politics: Democracy Revisited” based at the Middle East Centre. Her research focuses on the media industry in the Middle East and North Africa as it intersects journalism, public communication, policy, and academia. She has over fifteen years of experience as correspondent in conflict zones in the MENA region for international media.

“A useful reference tool for academics, policymakers and the media development community. The book is littered with countless specific examples of how journalism has shifted in the region over the last seven years, drawing comparisons with similar experiments in other areas such as Latin America and Eastern Europe. For this reason, it deserves to be read and referenced by media and MENA scholars as well as anyone who has an interest in the changing shape of the media and democracy.” (Aida Al-Kaisy, LSE Business Review, blogs.lse.ac.uk, October, 2017)

“This book is a must-read for anyone who is interested in better understanding the complexity, hybridity, and fluidity of both the Arab Spring transitions, as well as the numerous forces and multiple influences which are both shaping, and reflecting, them continuously, such as the equally complex, hybrid, and fluid roles of Arab journalists and mainstream media actors.” (Sahar Khamis, Human Rights Centre Blog, hrcessex.wordpress.com, September, 2017)
“El-Issawi’s book presents a comprehensive study of the traditional media landscape in the Arab World, outlining its role in the transition that followed the Arab Spring. It brilliantly captures the structural role of media as a major (political) actor in a period of tumultuous transition.” (Monica Ibrahim, Middle East Centre Blog, blogs.lse.ac.uk, March, 2017)

“This important book explores what is happening to the Arab media, politics, and public in the aftermath of the Arab spring. It turned out that old fashioned heritage media mattered most. Full of incident and nuance, curious and wry, the book is both realistic and yet reservedly optimistic. Lively, important, impeccably researched, it needs to be read.” (Jean Seaton, Professor of Media History, University of Westminster, UK)

“El-Issawi has written a fascinating book on post-revolutionary media and journalism in Egypt, Libya, and Tunisia. The book provides a lively, insightful and often disheartening account of journalists’ search for new professional roles and identities in transitional societies. Their experiences challenge simple answers to the questions of what good journalism is and how media can be re-built in a volatile and unsafe environment. A must-read for academics, journalists, and practitioners of international media assistance alike!” (Katrin Voltmer, Professor of Communication and Democracy, University of Leeds, UK)

“El-Issawi's book is a sober, nuanced analysis of media and political transition in the Arab world. It carefully dissects changes and inertia in media systems and journalistic practice. The book reflects El-Issawi's keen journalistic eye for facts and texture combined with academic analytical rigor. A must-read for anyone interested in understanding media politics in the region and the linkages between media and political transitions.” (Silvio Waisbord, Professor of Media and Public Affairs, George Washington University, USA)