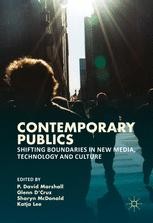 If the twentieth century has been dominated by discussions of the public, public life, and the public sphere, Contemporary Publics argues that, in the twenty-first century, we must complicate the singularity of that paradigm and start thinking of our world in terms of multiple, overlapping, and competing publics. In three distinct streams—art, media and technology, and the intimate life—this volume offers up the intellectual and political significance of thinking through the plurality of our publics. “Countering Neoliberal Publics: Screen and Space,” explores how different artistic practices articulate the challenges and desires of multiple publics. “Making and Shaping Publics: Discourse and Technology” showcases how media shape publics, and how new and emerging publics use these technologies to construct identities. “Commodifying Public Intimacies” examines what happens to the notion of the private when intimacies structure publics, move into public spaces, and develop value that can be exchanged and circulated.

P. David Marshall holds a research professorship and personal chair in New Media, Communication and Cultural Studies at Deakin University, Australia and is also a Distinguished High-End Visiting Foreign Expert at Central China University’s School of Journalism and Communication, China. He is the author, co-author, editor, or co-editor of many books including Celebrity and Power, 2nd Edition (2014), Companion to Celebrity (2015), Promotional Vistas (2016), and Persona Studies (2016).

Glenn D’Cruz is a lecturer in Drama and Cultural Studies at Deakin University, Australia. He is the author of Midnight’s Orphans: Anglo-Indians in Post/Colonial Literature (2006) and the editor of Class Act: Melbourne Workers Theatre 1987-2007 (2007). He has published widely in national and international journals in the areas of literary studies, performance studies and cultural studies.

Sharyn McDonald is a lecturer in Reputation Management and Marketing Communication at Deakin University, Australia. Her combined teaching and industry experience spans over 20 years and has strengthened her interdisciplinary approach to research. Sharyn’s research focuses on social responsibility and issue management with a particular emphasis on non-government organisations.

Katja Lee is a SSHRC postdoctoral fellow at Simon Fraser University, Canada and a member of the Persona, Celebrity, Publics Research Group at Deakin University, Australia. She has published essays on celebrity, public identity performance, and life writing, and is co-editor of Celebrity Cultures in Canada (2016).