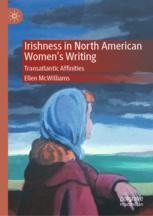 This book examines ideas of Irishness in the writing of Mary McCarthy, Maeve Brennan, Alice McDermott, Alice Munro, Jane Urquhart, and Emma Donoghue. Individual chapters engage in detail with questions central to the social or literary history of Irish women in North America and pay special attention to the following: discourses of Irish femininity in twentieth-century American and Canadian literature; mythologies of Irishness in an American and Canadian context; transatlantic literary exchanges and the influence of canonical Irish writers; and ideas of exile in the work of diasporic women writers.

Ellen McWilliams is Senior Lecturer in English Literature at the University of Exeter, UK. She is the author of Margaret Atwood and the Female Bildungsroman (2009) and Women and Exile in Contemporary Irish Fiction (2013) and has received a number of awards for research, including an Arts and Humanities Research Council Fellowship and a Fulbright Scholar Award.

‘This is a lively, thought-provoking, engrossing, and eminently readable study of cross-connections in North American women’s writing.Irishness in North American Women’s Writing: Transatlantic Affinities is a timely, original, and richly observant study of six diverse women writers and a valuable intervention in the field of transatlantic studies.’

'This absorbing, historically informed study further enhances Ellen McWilliams’ scholarly credentials in the field of Irish diasporic literary studies. Written in a lucid, accessible style, her book is an essential tool for those who wish to deepen their understanding of the subtleties of the transatlantic exchanges that make the work of these six North American women writers so compelling.’