Studies in the Political Economy of Public Policy
Free Preview 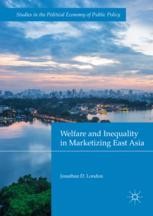 The world-scale expansion of markets and market relations ranks among the most transformative developments of our times. We can refer to this process by way of a generic if inelegant term – marketization. This book explores how processes of marketization have registered across East Asia’s diverse social landscape and its implications for patterns of welfare and inequality. While there has been great interest in East Asia’s economic rise, treatments of welfare and inequality in the region have been largely relegated to specialist literatures. Proceeding from a synthetic critique of political economy, this book places welfare and inequality at the center of a more encompassing comparative approach to political economy that construes countries as dynamic, globally embedded social orders defined and animated by distinctive social relational and institutional features.

Jonathan D. London is Senior University Lecturer of Global Political Economy – Asia at Leiden University in The Netherlands. His recent publications include Politics in Contemporary Vietnam (Palgrave) and journal articles in The Journal of Contemporary Asia, Social Science and Medicine, and The Annual Review of Political Science. He holds a PhD in sociology from the University of Wisconsin.

“The welfare regimes of East Asia are less understood than those of Western Europe in particular, despite the substantial and growing significance of the region in the global economy. Jonathan London's comparative study takes a substantial step towards remedying this while also connecting debates on welfare regimes to broader debates in comparative and global political economy. The analysis is sensitive to the general shift from welfare regimes aimed to protect citizens from the market to regimes of social protection that aim to complement and strengthen it.  His nuanced and systematic analysis is set in a sophisticated theoretical framework, and will be an enduring benchmark for studies of the region. Students of East Asia and of comparative welfare regimes will benefit enormously from reading it.” (Paul Cammack, University of Manchester, UK)

“London's impressive book systematically analyses the complex relationship between inequality and welfare and the politics and social interests that shape economic and social policies. It breaks new theoretical ground by locating patterns of welfare and inequality within the specific strategies of accumulation and growth that have underpinned the integration of East Asian states into the global political economy.  The book provides for an ambitious and broad ranging research agenda that locates welfare policy, institutions, and inequality at the intersection of local, national and global processes, and associated social forces and interests. It moves debates on welfare and inequality away from a narrow institutionalist focus on the analysis of families of welfare regimes toward the analysis of continuity and change in the power and interests that define political economies and shape social policies, welfare, and inequality over time. This innovative and stimulating book is compulsory reading.” (Kanishka Jayasuriya, Murdoch University, Australia)

“Jonathan London, a leading scholar of social change in Vietnam, has produced a careful and richly textured study of the relationship between market liberalization, welfare and inequality in East and Southeast Asia that situates these changes within their proper social and historical context. Welfare and Inequality in Marketizing East Asia provides a fresh perspective on these issues and will spark a long overdue debate about the social implications of economic liberalization in developing Asia.” (Jonathan Pincus, The Rajawali Foundation)