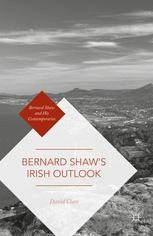 Using close readings of Shaw's plays and letters, as well as archival research, David Clare illustrates that Shaw regularly placed Irish, Irish Diasporic, and surrogate Irish characters into his plays in order to comment on Anglo-Irish relations and to explore the nature of Irishness.

David Clare is an Irish Research Council-funded postdoctoral research fellow at the Moore Institute at the National University of Ireland, Galway. His work has been published in the Irish Studies Review, the New Hibernia Review, the Irish University Review, Studies: An Irish Quarterly, and Emerging Perspectives. He holds an MA and a PhD in Anglo-Irish Literature and Drama from University College Dublin, Ireland.

“Writing in a fluent and reader-friendly critical style, Clare conducts a thorough and well-constructed study of the Shavian works, drawing attention to some of the lesser known pieces as well. The book is an exemplary source of motivation for exploring plays not discussed here through Shaw’s inimitable Irish outlook. With this monograph David Clare undeniably contributes to the re-canonisation of George Bernard Shaw — not only as an Irish-born but also as a genuinely Irish dramatist.” (Bence Gábor Kvéder, The AnaChronistT, Vol. 19, 2019)

“A concluding section on the long tail of Shaw’s evolved Stage Englishman on Irish authors from Joyce to Brendan Behan is splendid proof of Shaw’s artistry and Clare’s erudition. Although Bernard Shaw’s Irish Outlook is addressed primarily to Irish studies, Clare accomplishes the daunting task of making the intricacies of Irish history, politics, and aesthetics compelling to all literature and theatre scholars.” (Lawrence Switzky, Canadian Journal of Irish Studies, Vol. 41, 2018)

“Although Shaw was determined to ‘show the Englishman his own absurdities’, his stage Englishman, exemplified by sentimental hypocrite Tom Broadbent in John Bull’s Other Island, is far more nuanced than the crass stage Irishman presented by English writers. This perspective, along with Clare’s persuasive positioning of Shaw as a Revival writer who ‘maintained a strong Irish outlook throughout his life’, makes his book a fascinating and important addition to Shavian scholarship.” (Eleanor Fitzsimons, The Irish Times, irishtimes.com, October, 2017)

“Clare’s style is critically engaged and thought-provoking but accessible throughout. He is full of enthusiasm for Shaw’s work and this imbues his work with a dynamism and energy throughout which makes it a pleasure to read. His book can be enjoyed and understood by academics, Shaw enthusiasts and the informed layman alike.” (Michelle C. Paull, The Shavian, Vol. 13 (6), 2017)

“The book offers the first comprehensive examination of Shaw’s Irishness as being central to his perspective. David Clare provides intelligent contextual readings of Shaw’s life and writings that place him firmly in the tradition of many Irish writers. … Clare’s book will prove to be a valuable work indeed.” (Brad Kent, Irish Studies Review, August, 2016)

“This volume … is a welcome and important addition to Shaw studies. The volume offers up-to-date Shaw criticism, especially emanating from recent Irish scholarship, which Clare builds upon confidently to draw the portrait of an author touched by the Irish landscape. He complements close reading analysis with insights provided by Shaw’s prefaces and correspondence, and submits a remarkable body of notes that are testament to Clare’s minutiae and his knowledge of Shaw and Irish literature.” (Anne Étienne, Shaw, Vol. 36 (2), 2016)

"Bernard Shaw's Irish Outlook is an important, original, well-written, critically incisive, and long overdue study of Bernard Shaw's Irishness . . . It is the first single-authored volume exclusively focused on the subject of Shaw and Irishness. It will be joined by others in time, but it is unlikely to be bettered." Anthony Roche, Professor, University College Dublin, Ireland

"David Clare's radical analysis, delivered in subtle prose, constitutes a challenge to Shavians and to Hibernophiles to rethink some of their most basic assumptions. A bracing and enjoyable read." Declan Kiberd, Professor, University of Notre Dame, USA

"Clare wonderfully illuminates the degree to which Shaw's Irish identity remained the great constant in his protean career." Fintan O'Toole, The Irish Times

"We know that Ireland is a presence in some of Shaw's plays - John Bull's Other Island, most famously. David Clare's fascinating and important study gives us new ways to think about such works but also sheds new light on many of Shaw's most famous dramas, including Pygmalion and Saint Joan. As readable as it is insightful, this book will be of wide interest to scholars of Shaw, Irish literature, and theatre studies." Patrick Lonergan, Professor, National University of Ireland, Galway